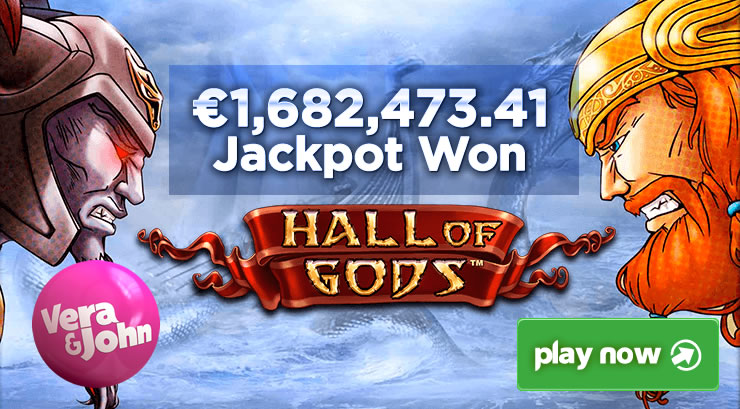 Vera & John Casino has announced that a lucky customer of theirs has won over €1.6 million playing the Hall of Gods progressive jackpot slot.

The customer, known as Lars, is from Norway and won €1,682,473.41 playing Hall of Gods at Vera & John Casino yesterday (Tuesday the 19th of January 2016). Vera & John have not released details of the winner yet (except that he’s from Norway and is name is Lars) – when we have them, we will update this article accordingly.

Hall of Gods is powered by Net Entertainment and is their second most popular progressive jackpot game behind Mega Fortune. With 5 reels and 20 paylines, it has a Norse mythology theme and can be played from just 20p a spin (just on desktop devices).

There are 3 bonus features – you have the Expanding Wild feature which applies when the Midgard Serpent Wild appears on any of the 3 middle reels. It will then expand and cover the whole reel – if you get 3 of them, prepare yourself for a colossal win!

There is a Free Spins feature where you can begin with up to 20 free spins – all wins are subject to a 3x multiplier too with more free spins available during the feature. Hall of Gods is all about the Pick Win feature where Thor’s Hammer is used to break the shields on the screen – if you match 3, you will win that cash prize. Uncover 3 Mega Jackpots to win a life-changing amount. For full details, check out the Hall of Gods slot review.

Vera & John Casino is a brilliant place to play slot games – you have titles from Net Entertainment, IGT, Microgaming, WMS, Barcrest, NextGen Gaming, Play ‘N Go and many others including new releases such as Pyramid Quest for Immortality from NetEnt, Wild North from Play ‘N Go and Family Guy from IGT.

New UK players are welcomed with 10 no deposit free spins (on NetEnt’s Sparks) as well as a 100% first deposit bonus up to £100 – you will then get 10 free spins on Stickers and a further 10 free spins on Mega Fortune once you’ve made your second deposit. Watch out tomorrow though as they will be adding the much anticipated Guns N’ Roses slot by NetEnt.