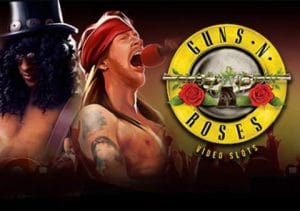 Rumours abound that Axl, Slash and the rest of the Guns N’ Roses gang will be reforming for a 30th anniversary tour later this year. Slot fans won’t have to wait until the summer to see (and hear) the rock legends though thanks to a brand new slot from Net Entertainment.

It’s a 5 reel, 20 payline video slot that’s brimming with goodies including added wilds, big multipliers and free spins galore. Take a trip to Paradise City from between 20p and £100 per spin. The new slot is the fruit of a collaboration between NetEnt and entertainment giants Universal Music and as you’d expect from such a heavyweight partnership, they’ve thrown plenty into making it look and sound a treat.

Symbols on the reels include Axl and Slash as well as the covers of some of the bands most iconic albums. Even the playing card symbols benefit from the Roses treatment. The Guns N Roses logo is the wild – it can appear as a stacked wild to fill up entire reels.

More important in a slot based on a band is the soundtrack – here you’ll have the choice Welcome To The Jungle, Sweet Child O’ Mine, Paradise City, November Rain or Chinese Democracy blasting out as you play. Interspersed among winning spins are video clips from the band’s live shows.
There’s plenty on offer in the features department too – the first thing to look out for is the random multiplier which can hit in the base game and boost your wins by up to 10x.

Also triggered randomly in the base game is the Legend Spins feature which will award you 3 bonus spins – reel 3 will be a stacked wild reel on the first of these 3 extra games. On spin two, it’s reels 1 and 5 and on the final spin it’s reels 2 and 4 that are wild.

The third random base game extra is the Appetite for Destruction Wild feature – a cross-shaped overlay wild that can appear either fully or partially formed on 1 of 3 positions on the reels. These extra wilds can combine with standard wilds to create some fantastic winning opportunities.
In addition to the randomly triggered featured, 3 more bonus features are on offer if you hit 3 scatters on reels 1, 3 and 5 – stop the spinning wheel to determine which one you’ll get.

The Crowd Pleaser Bonus feature is a variation on the classic pick ’em feature – it takes place over 3 rounds. First choose 3 of the 8 symbols shown to reveal standard cash bonuses, free spins and +1 (extra pick) symbols. If you land 60 coins or more, you’ll move to the next level.

A similar process continues in the rounds that follow. Find 3 free spin symbols across all 3 rounds and you’ll be awarded 10 free spins. Build up a total of over 800 coins over the 3 rounds, that winning total will be doubled.

The Encore Free Spins feature will award you 10 free spins – during the feature, an image of 1 of the members of the band will appear as an overlay stacked wild on the 3 middle reels boosting your winning chances. Finally, there’s the Coin Win feature which does just what you’d expect it to by offering a prize equal to the amount shown.

NetEnt has packed plenty into the Guns N’ Roses slot – it’s a typically glossy affair which is no surprise given the status of the band. Despite not being huge lovers of Guns N’ Roses high adrenaline stadium rock anthems, we found plenty to enjoy in the slot.

There’s action galore in the base game and some top features on offer in the bonus features. Fans of the band will love what’s on offer here and even if the charms of Axl, Slash and company have passed you by, there’s enough here to make it worth a closer look.

The key to the big wins is the Encore Free Spins feature as getting wilds as well as the cross overlay wild can give you huge gains. If you like slot games based on music bands, I strongly recommend WMS’ KISS Shout It Out Loud.