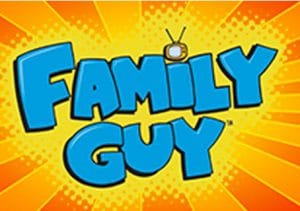 WHERE TO PLAY Family Guy SLOT

The animated adventures of the Griffin clan have formed the basis of one of the most popular shows on TV and now slots fans can enjoy the Family Guy experience. Created by US developer IGT, this 5 reel, 30 payline title, available on desktop, mobile/tablet devices, is crammed with features based on the show’s central characters – look out for a pick me bonus, a fight round with multipliers and free spins with added sticky wilds amongst others. Enjoy a night in Rhode Island from between 25p and £250 per spin.

All of your favourites from the show are present and correct on the reels so look out for symbols featuring Meg, Chris, Stewie, Brian the dog, Lois and of course Peter Griffin. There’s no playing card filler here, instead IGT has opted for an assortment of ray guns, teddy bears, TVs and bottles for the low value symbols. The visuals are super slick, HD quality and look superb.

There’s plenty on offer in the features department too – finding 3 or more of the World Bonus symbol is the key to triggering three of them. Spin the globe to find out which one.

Set in Quahog’s favourite hostelry, the Drunken Clam Bonus feature sees you choose a character who will reveal a multiplier – this multiplier increases as the other characters get more and more drunk. Look out too for the beer taps which can pour out anywhere between 5 and 750 coins. The Drunken Clam Bonus continues until your character is the last man standing or he collapses in a drunken stupor. Prizes of between 25x and 1,000x your coin value are on offer in this boozy bonanza.

After the booze up comes the equally bizarre Chicken Fight feature where Peter gets involved in a brawl with an oversized chicken – pick who you think will win this 3-round, heavyweight encounter with multipliers of up to 5x on offer if your selection wins. You’ll be awarded between 1 and 7 prize sacks, each containing a cash prize of between 5x and 1,000x your coin value.

Last but by no means least is Lois’ Hot Free Spins Bonus feature – trigger this and you’ll receive an initial 10 free spins. Land the Giggity Retriggity symbol on reel 3 and you can look forward to 5 extra spins. Look out too for the wild heart symbol – when it lands on reel 5, it will fill a meter at the bottom of the screen. When all 3 hearts are filled the 4 different coloured Lois symbols will turn wild and remain sticky for the duration of the feature.

In addition to that trio of slightly bonkers bonuses, comes a quartet of randomly triggered extras.  You can activate any of these on any spin that doesn’t include a bonus. The details are as follows:

You’ll only need 2 rather than 3 Bonus symbols to trigger the World Bonus round if you’re lucky enough to land Brian’s feature.

And breathe out! That really is plenty to offer in the features department. If you like lots of variety in your slots, then Family Guy most certainly fits the bill. Of the triggered rounds, we like Lois’ Free Spins feature where the extra sticky wilds can be a big help. Of the random bonuses we liked Stewie’s extra wilds. Variance is medium offering a balanced range of payouts, both in the base game and the feature rounds.

Family Guy has proved to be a surprise and massive TV hit – we fully expect the online slot version to follow suit given its impressive visuals and extensive array of feature. Fans of the Griffin family will of course find plenty to enjoy. Even if you’re a Family Guy virgin, there’s enough on show here to ensure plenty of entertainment. If you’re looking for slots based on TV shows, NetEnt’s South Park and South Park Reel Chaos are worth playing.