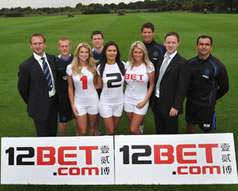 Wigan Athletic have signed the most lucrative shirt sponsorship in their history after signing a 2 year deal with the online betting company 12Bet. The deal started on July the 1st.

As part of the agreement between 12Bet and Wigan Athletic, the online betting company will feature their logo on the Latics shirts and training gear (excluding juniors of course) for the next 2 seasons and an option of a 3rd season. Furthermore, 12Bet will be the official betting and gaming partner of Wigan and have a presence in the DW Stadium.

Neil Ryan who is the Head of Marketing, Commercial and Retail at Wigan Athletic said they are “really pleased to have agreed this major new commercial partnership”. He went on to day they secured a “substantial fee from a high profile brand like 12Bet” and shows where Wigan Athletic are going. Jonathan Jackson, Chief Executive of the club, said that “he Barclays Premier League is a global brand and Wigan Athletic are now firmly established throughout the world as a part of it.”

He said they wanted to grow their name internationally and wanted a brand that was an ideal fit for the club. He said 12Bet fits the bill in this respect. He went on to say that “12Bet is an exciting new partner for Wigan Athletic and we are delighted to be working with them.”

Rory Anderson, CEO of 12Bet in Europe, said they are “delighted to join forces with Wigan Athletic – a sponsorship that will give us great exposure both in the UK and globally, providing the perfect platform to promote our core proposition; in play football betting.”

He said they are happy with the way the club operates and prides itself on “loyalty, commitment and team spirit” – values that tie in with the ethos at 12Bet. They will work closely with Wigan Athletic to maximize the partnership.

As you’ve read on CasinoManual.co.uk, there have been a few football clubs sign sponsorship deals with online gaming operators. BetDaq became the online betting partner of Celtic FC whilst Bodog Europe announced a shirt sponsor deal with West Bromwich Albion. Genting Casinos became the Aston Villa shirt sponsor as well as 32Red continuing their shirt sponsorship with Swansea City back in May.