Aston Villa Football Club is the latest Premiership football team that will bear a gambling company’s logo on their shirts as from the 2011-2012 season.

The partnership between Aston Villa and Genting will run for an initial 2 seasons. Genting are the leading international leisure and hospitality group and the UK’s largest operator of land based casinos. As part of the partnership agreement, the Genting Casinos logo will be on the home and away shirts. The Aston Villa away shirt will look as follows: 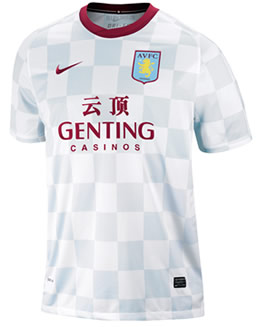 Peter Brooks, who is the executive deputy chairman of Genting, said they “are delighted to be partnering with a football club with such an esteemed heritage as Aston Villa”. He went on to say that the English Premier League “is the pre-eminent football league with a vast international following – while Genting is a leading leisure and hospitality group also with a huge international presence.”

Peter said the sponsorship “is a natural fit and marks an important milestone in Genting’s development” as they continue to expand their presence both in the UK and on an international scale.

Paul Faulkner, Chief Executive of Aston Villa, said: “We are pleased and excited to be partnering with Genting and we are looking forward to benefiting from their position as a leading international corporation in the leisure and hospitality industry.

“We believe this will be a good and positive partnership for the club and it reflects our continued growth.

“The fact that Genting has strong local connections in addition to its international dimension makes this a good relationship for the club and we anticipate that it will work well as we embark on a new chapter for Aston Villa.”

Genting is based in Birmingham and is owned by the $17 billion global Genting Group. They have over 40 UK land based casinos including Crockford’s which is the world’s oldest private gaming club. Online, they also run Circus Casino which is a recommend online casino here at CasinoManual.co.uk. To read more about Circus Casino, that is powered by the impressive Playtech software, click here.