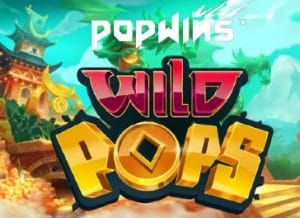 WHERE TO PLAY WildPops SLOT

Once you pop, you can’t stop. No, it’s not a slot based in a box of sour cream and onion Pringles, the tagline comes from the WildPops slot, another game from Yggdrasil Gaming and Avatar UX Studios to use the developer’s innovative PopWins mechanic. The win both ways WildPops offers up to 33,614 ways to win. Look out too for wild extras that come into play after a third successive pop win as well as a multiplier which increase when you collect 7 symbols in the win meter. Unlock the full board for extra lives too. Find out more about this rather unusual slot in our in-depth WildPops review.

Each round starts on a 5 reel, 3 row, 486 ways to win machine. The win both ways game engine means that winning combinations can start from both reel 1 and reel 5.

Bet levels in WildPops range from between 20p and £50 per spin. Click on the box under the spin button to alter the levels. Click on the arrows above the spin button to set up autoplay. You can set between 10 or 1,000 spins or leave them running indefinitely. You can also set them so they end when you trigger the feature. If you wish, you can use the spacebar to spin.

The WildPops RTP is 96.2%. The hit rate is 21.8% so you’ll have to be patient. We found the WildPops volatility to be in the medium to high range. In terms of win potential, the maximum payout is 17,707 x bet per free spin. This can be achieved in the Bonus Game feature as you play with 33,614 ways to win on each spin.

The gameplay in the WildPops slot is a far cry from a classic fruit machine. There’s a lot going on here, starting with the PopWins mechanic. Other goodies on offer if you get on a winning run include randomly added wilds, multipliers and extra lives.

If you land a winning combination, the winning symbols are removed and 2 new symbols replace them with a new payout calculation to follow. If a new winner is formed, the process is repeated with the reels expanding once again. Each reel expansion also increases the number of ways to win. If they reach their maximum, you’ll have 33,614 ways to win active.

If you land 3 PopWins in a row, you’ll receive a special extra. A pair of wilds are dropped onto random positions on the reels, further boosting our chances of finding a new winning combination. This also happens if you land 6 or 9 wins in succession.

When you land a winning combination, the successful symbols are collected in a meter to the left of the reels. Each time you collect 7 symbols, the multiplier increases by 1x. The multiplier reverts to 1x following a winless pop.

If you manage to get on a run and expand all the reels to their maximum size, you’ll activate the Bonus Game feature. Your reward is 3 extra lives  which are effectively free spins. These are used up each time you have a winless pop. Multipliers are retained throughout the feature meaning they don’t drop to 1x following a winless spin. The very slightly pixelated but classy visuals found in Yggdrasil slots are instantly recognisable. That’s true of WildPops which is very easy on the eye. There’s a slight Chinese-feel to the imagery.

You’ll see A to 9 symbols as well as an assortment of creatures and dragons. The best standard symbols that can appear on a normal spin offers awards of 5 x your bet if you land 5 in combination. Better still is the blue dragon. This can only appear following a PopWin. It pays 5, 10 or 30 x bet if you land 3, 4 or 5 on adjoining reels.

The visuals are very nicely drawn, backed by a surprisingly gentle but rather catchy backing track. It doesn’t seem an obvious fit for a slot that has so many moving parts but it actually fits perfectly. Like most slots in the Yggdrasil Gaming catalogue, there’s no cause to grumble when it comes to the design of WildPops.

The classy sound and visuals and simple gameplay make the WildPops mobile slot a very playable prospect. It’s very easy on the senses, even on the smaller screen. The features can still trigger some volatile action too.

If classic fruit machines and straightforward gameplay top your list of requirements for a slot, WildPops might not be for you.  If on the other hand, you fancy something a little unusual then WildPops should certainly pique your interest. The gameplay isn’t a million miles away from the all-conquering Megaways mechanic.

The WildPops slot can really come into its own if you manage to open up the whole of the reels and trigger the bonus spins. The expanding multipliers and random wilds can deliver some explosive results. Get lucky there and the unusual WildPops could live up to its name.

This is the second slot game to use the PopWins mechanic after the PopRocks slot was released. PopRocks has 1 less bonus feature but has a higher RTP of 96.8% and offers 72,188 x bet payouts. Another recommended game is the Neon Rush: Splitz slot (by Yggdrasil Gaming) which offers a unique mechanic.

What is the WildPops slot RTP?

The WildPops return to player rate is 96.2% which is a pretty solid number. The hit rate is 21.8% so you might need to show some patience. It’s also medium to high variance so tread carefully.

What is the WildPops maximum win?

The most you can win from a single spin in WildPops is 17,707 x your bet. The likeliest route to success comes via the Bonus Game feature. These 3 extra lives can really get things moving if you get the multiplier and random wilds to work in harness.

Where can I play the WildPops slot?

Yggdrasil Gaming is the developer behind WildPops. You’ll find slots from Yggdrasil Gaming, including WildPops, at a whole host of online casinos. Check out our list of the best WildPops casinos here.

How does the PopWins feature work?

When you get a win, the contributing symbols are removed and replaced with 2 new symbols. This increases the number of ways to win. If another win is formed, the process is repeated with up to 33,614 ways to win in total if you expand the number of symbols to their maximum.