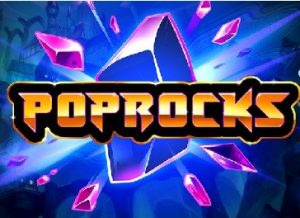 WHERE TO PLAY PopRocks SLOT

Slots players are always looking for innovative new gameplay and Yggdrasil Gaming has attempted to deliver just that with the launch of its new PopWins game mechanic. The first release to use the PopWins machine is PopRocks. As you might expect given its name, symbols are popped whenever you land a winning combination and replaced by new ones. These new symbols can expand the size of the game engine and reach 7 symbols high. For every 7 symbols that are popped a multiplier increases by 1x. Fully extend the reels to their maximum size of 33,614 ways to win to trigger the Bonus mode. Here, an extra wild is added and multipliers increases by 2x every seventh pop. Let’s see whether the new game mechanic is a hit or miss in our detailed PopRocks review.

The gameplay in PopRocks is rather different from your classic fruit machine or even a common or garden video slot. There aren’t any standard bonus features here. If you’re looking for cash trails, click and pick bonuses or even free spins then you won’t find them here.

The lack of traditional feature rounds might make PopRocks sound a little on the dull side. It’s certainly not that, especially when you do manage to activate Bonus Mode which brings rapidly expanding multipliers into play. To see how to trigger the bonus, you’ll first need to know how the base game engine works and what the PopWins feature is.

The action in PopRocks starts on a 5 reel, 3 row machine that offers 486 way to win. Land a winning combination and those symbols are popped to create a PopWin. 2 random symbols are added to the position where the popped symbol appeared. These new symbols increase the size of that reel and also boost the potential ways to win. You can keep track of how many ways to win are active via the meter to the right of the reels.

As a symbol is popped, it lights up a space on the meter to the left of the reels. For every seventh symbol that is illuminated, a multiplier increases by 1x. This multiplier is then applied if a new winning combination is created.

The pops keep on coming as long as a new winner is formed. If no PopWin is present, the reels reset to their 3 reel, 5 row, 486 ways to win set up. The multiplier reverts to 1x too.

That rather roundabout route brings us back to the Bonus Mode feature. This is activated when all 5 reels are fully expanded to their maximum 7 symbol height. This takes the number of ways to win up to a massive 33,614.

During the Bonus Mode, the PopWins continue as in the base game. As the reels can’t get any bigger, 1 symbol rather than 2 is replaced with each PopWin.  Observant readers will have noticed that we didn’t say anything about wilds in the base game. That’s remedied during the bonus round where 1 wild is added to a random position at the start of the round.

Where things have the potential to get even more interesting during the Bonus Mode feature is with the multiplier. Every seventh symbol that is illuminated boosts the multiplier by 2x rather than the standard 1x in the base game. There’s no limit to how high this multiplier can go. Get on a roll here and the coins can really start to fly.

Winning combinations in PopRocks are created by landing matching symbols on adjacent reels, rather than standard paylines. The higher the reels get, the more ways you’ll have to create a winner. As we’ve already stated, maximum sized reels offer a mighty 33,614 winning chances.

Stakes in PopRocks range from between 10p and £30 per spin which makes it a very playable slot whether you’re a microstakes player or more of a high roller.

Like most slots in the Yggdrasil Gaming catalogue, there’s an autoplay option. This allows you to select between 2 and 100 spins. You can stop when you trigger the Bonus Mode feature if you wish. You can also set the speed of the auto spins. There’s a fast mode as well as standard mode if you really want to get flying.

We found PopRocks to be a volatile slot. Expect high risk but potentially high rewards – up to 72,188 x bet on each spin or free spin! The PopRocks RTP stands at 96.8% which stacks up very favourable to many competitor slots. You’ll get a very decent bang for your buck here.

Yggdrasil Gaming usually put plenty of effort into creating slots that impress visually and aurally. PopRocks doesn’t disappoint on either score. The visuals here are terrific. With a fantastical castle in the background, you’ll see A to 10 royals alongside a collection of brightly coloured gemstones adorned with dragon motifs.

Everything is lovely and sharp which is important given the number of moving parts associated with the PopWins game engine. You’ll hear a sweeping orchestral score while you spin too. It could come straight out of an action adventure movie. It really ramps up the tension when you get close to reaching the Bonus Mode feature.

The interface is nice and simple to use to. There’s plenty going on but the crisp visuals make it very easy to follow. That’s true whether you’re playing on a computer or using a much smaller tablet or mobile device.

Yggdrasil Gaming has taken elements of cascading reels and Megaways slots to create its new PopWins mechanic. It comes together rather nicely in this debut outing. The sound and visuals are superb. There’s plenty of potential action on offer from the gameplay too thanks to the shape-shifting reels, changes in the number of ways to win and the expanding multipliers.

The Bonus Mode feature can be well worth winning with the fully expanded 33,614 ways to win and double multipliers combining to excellent affect – and for potential 72,188 x bet wins. If you want a high number of ways to win, the Pillars of Asgard slot from NextGen Gaming offers 1 million ways to win potentially.

💲 What is the maximum win in PopRocks?

Payouts of up to 72,188 x bet are possible if you combine the biggest winning clusters with the potentially massive multipliers. Look out for Bonus Mode feature where there are 33,614 ways to win and double multiplier boosts.

Winning symbols are popped and replaced by new symbols. These also increase the number of ways to win and can also bring expanding multipliers into play. These increase by 1 with every seventh symbol popped in the base game.

⚡Is PopRocks easy to play?

The PopWins game mechanic is a little unusual and it can take a little getting used to. It’s straightforward enough though. The crisp visuals and cracking backing track make for a very playable slot. You can try the game in demo mode above to make you familiar with the mechanic.

🎰 What bonus features does PopRocks have?

You won’t find the standard free spins, cash trails or feature wheels here. The bonus mode is a continuation of the base game. Multipliers can increase more rapidly though and the 33,614 ways to win makes for some potentially massive winning potential.