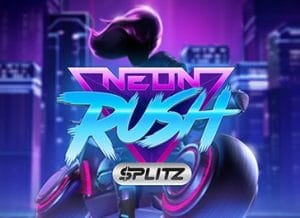 Rev up your engine and try and race away with a bumper haul of coins in the Neon Rush: Splitz slot. A mysterious motorcyclist is the star of this futuristic looking game from Yggdrasil Gaming that combines high-spec visuals with some exciting extras. Gameplay highlights include split symbols which can create 15-in-a-row combinations, a bonus round that awards up to 30 free spins and 6 potential jackpot prizes that can strike on any spin and deliver payouts of up to 25,000x your bet. Let’s take this motorbike adventure for a proper spin in our Neon Rush: Splitz review.

Central to much of the best action in Neon Rush: Splitz are the $ symbols. These are the Splitz symbols. When they land, they split into between 1 and 5 symbols. For example, if the $ appears on reel 2, it splits into 2 symbols, on reel 3 it splits into 3 symbols and so on.

In the base game, each $ symbol can split into any low or high value symbol, a wild or a jackpot symbol. If you land a $ on all 5 reels on the same spin, you can create a winning combination that’s made up of 15 symbols with potential payouts of up to 500x your total bet.

There are 6 potential jackpot prizes on offer in Neon Rush: Splitz. These are triggered by landing $ symbols which then split into jackpots. The more jackpots in the combination, the bigger the potential rewards on offer. You’ll need to land 5 or more jackpot symbols via the $ in order to land a prizes. Here’s what’s on offer from the 6 jackpots.

The best opportunities to ride away with a big prize come via the Free Spins feature. It’s triggered by landing 3, 4 or 5 of the neon Free Spins symbol anywhere on the reels on the same spin. You’ll then go on to play 10, 20 or 30 free spins.

The $ Splitz symbols can really come into their own during these free games. During the free spins, they will only split into wild or jackpot symbols. They won’t split into standard symbols like in the base game. The wilds will perform all the usual substituting functions which makes it that much easier to create a winning combination.

You’ll land $ symbols on pretty much every free spin so expect to see plenty of extra wilds during the free spins. Landing a jackpot prize becomes a much more achievable proposition than in the base game too.

While the variance in Neon Rush: Splitz isn’t stratospherically high as some releases, it’s still volatile enough to expect some pretty hefty bankroll swings. The best chances come from the Free Spins feature. In most cases, you can expect to land the minimum 10 free spins.

That can deliver some decent enough results thanks to the $ Splitz symbols. It’s not the easiest round to trigger but can be worth the wait. We’d put the overall variance in the medium to high range.

The set up here is relatively straightforward. The action takes place on a 5 reel, 3 row, 10 payline machine. So far, so standard. The main innovation is the presence of the $ Splitz symbols which shake things up a bit. You can play at coin levels of between 1p and £4 which means the minimum and maximum stakes stand at 10p and £40 respectively.

If you fancy playing on the move, Neon Rush: Splitz stacks up pretty well. There aren’t a huge number of moving parts here so it’s easy enough to follow the action, even on a small screen. The electro soundtrack works well too, even through a tinny speaker.

You’ll have the opportunity to activate autoplay mode if you wish. This offers a minimum of 10 spins, up to a max of 1,000. There’s no turbo or quickplay mode though which is something of a surprise.

The Neon Rush: Splitz RTP stands at 96.3%. That’s not as high as some Yggdrasil Gaming slots but is still better than what’s on offer from many other developers. The max win is 25,676 x bet (25,000 x bet from the Ultra Jackpot).

A futuristic cityscape is the setting for Neon Rush: Splitz. Pastel neon shades dominate the colour scheme. It looks and sounds like a 1980s version what the future was supposed to look like, complete with a synth heavy backing track.

The visuals aren’t quite as super sharp as you might expect but they’re clear enough to do the job without being distracting. There are just 5 standard neon shaped symbols in play so the design isn’t overcluttered. The imagery is good without being from the very top drawer. A similar slot looks wise is Retro Rush by Playtech.

For all its futuristic design, Neon Rush: Splitz is actually a rather straightforward slot. Take the Splitz symbols out of the equation and you’ll find plenty of very similar releases.

The Splitz symbol certainly adds another layer to the gameplay though. They can really come alive during the free spins where the extra wilds and jackpot can really fly. We enjoyed Neon Rush: Splitz without being totally bowled over. If you like futuristic, sci-fi tinged slots, then it’s certainly worth investigating.

These are special $ symbols that split to reveal between 1 and 5 matching symbols depending on what reel they appear. In the bonus round, they split to reveal wilds or jackpot symbols only. You should try Yggdrasil Gaming’s other Splitz game, Temple Stacks: Splitz which uses the mechanic in a different way.

🥇 How much are the jackpots worth in Neon Rush: Splitz?

They jackpots here aren’t progressives. They can still deliver some potentially life-changing rewards though. Land the Ultra Jackpot for an award of 25,000x your total bet.

🎰 Are there are free spins in Neon Rush: Splitz?

Yes. Landing 3, 4 or 5 of the free spins scatter symbol anywhere on the reels on the same spin awards 10, 20 or 30 free spins. The Splitz symbols turn into jackpots or wilds only here too for bigger potential wins.

We found Neon Rush: Splitz to be volatile enough to keep things interesting without being totally over the top. We’d put the variance on the north side of medium.