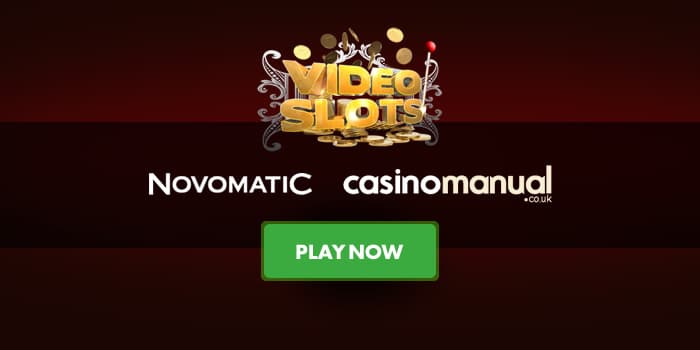 VideoSlots Casino now offers UK players 22 Novomatic games including classics like Lord of the Ocean and Book of Ra Deluxe.

The online casino offers you video slots from more software providers than anyone else and now they have upped the ante (once again!) with the addition of Novomatic. UK players can now choose from 22 Novomatic games – more games will be added in the coming days/weeks. All video slots can be played on desktop, mobile and tablet devices which helps.

Anyway, you have all the land based favourites such as Book of Ra Deluxe, Lord of the Ocean, Lucky Lady’s Charm Deluxe, Dolphin’s Pearl Deluxe, Sharky and Plenty on Twenty amongst others. However, I recommend you play 5 of the newer games:

Chicago is a 5 reel, 20 payline game that is based on mobsters in the Prohibition Era. The wild symbol rewards you with up to 500 times your stake (for 5 in combination). It benefits from a Free Games feature where you can play with up to 24 free spins – on each win, you will activate the Bottle Shooting Bonus feature where you shoot bottles to get a multiplier up to 10x.

Mighty Trident is a 5 reel, 20 payline offering that is based on the Poseidon (the God of the Sea). With a total of 5 bonus features, 4 of them can be played, at random, in the base game – the compass moves the reels in the needle’s direction to give you successive wins on every spin. I like the Free Spins feature where you get 10 free spins with super stacked high value symbols.

Shooting Stars is a 5 reel, 10 payline game that is similar to NetEnt’s Starburst. Set in outer space, the wild appears on the 3 middle reels and takes over the reel it lands on with a free re-spin to follow. If you get another wild, you get another expanding wild with another re-spin. In total, you can get 3 re-spins and 3 wild reels for out of this world wins.

Reel Attraction has 5 reels and 20 paylines and set in a professor’s lab. The professor lands on the 1st reel to activate the Reel Slide feature – this sees magnet wilds appear on other reels with a re-spin granted. The magnet wilds then shift 1 reel to the left. It also has a Free Games feature where you can play with up to 40 free spins – the professor is central to the action as he becomes an expanding sticky wild reel!

Gorilla is a 5 reel, 50 payline offering that is based on the mighty silverback in the African bush. It’s all about the Free Games feature where you can play with up to 15 free spins. More importantly, an extra wild symbol is added to the reels on every free spin!

If you haven’t played at VideoSlots Casino, you can benefit from 11 no deposit free spins on NetEnt’s Starburst – then there’s a 100% match bonus up to £200. With over 2,000 video slots to choose from, you can benefit from £70,000 worth of weekly casino races, fast cashouts and award-winning customer service.

Take me to VideoSlots Casino