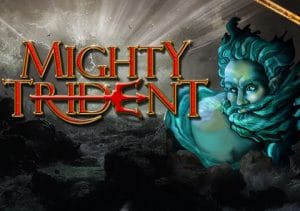 WHERE TO PLAY Mighty Trident SLOT

Join Poseidon, God of the Sea in Mighty Trident, a feature-packed, ancient Greek themed slot powered by Novomatic. This 5 reel, 20 payline slot comes with free spins with stacked reels as well as reel shifts which follow every successful spin. Look out too for randomly triggered win spins, morphing reels, reverse spins and bonus wins. Playable across all devices, head to the ocean from between 20p and £50 per spin.

Novomatic aren’t renowned for creating feature heavy video slots but we’re pleased to report that Mighty Trident is something of an exception – the first one to consider is the Compass feature. After every winning spin, the needle on the compass above the reels will spin. If it points north, the reels will shift 1 position up.

South moves the reels down 1 with west and east moving them left or right. A new payout consideration will be made. If there’s another winner on show, there’ll be another reel shift. These keep on coming until there’s no winning combination on show.

Mighty Trident also comes with a traditional Free Spins feature which is triggered when the free spins symbol lands on reels 1, 3 and 5 – here you’ll be awarded 5 free spins. A little skinny perhaps but the reels are boosted by super stacked high value symbols which can quickly mount up. The Compass feature is in play during the free spins too, offering even more winning chances.

There are also 4 randomly triggered extras – listen out for the crack of thunder and watch as Poseidon plants his mighty trident. The goodies on offer here are:

Visually, Mighty Trident is pretty well done – look out for an assortment of Greek gods and goddesses spinning around the reels. They look especially impressive when spinning in stacked formation. The soundtrack, especially in the free spins, has a suitably epic feel.

While the random extras can deliver some nice little treats, it’s the free spins round where the biggest prizes are on offer. The stacked symbols in concert with the Compass shifts can deliver some impressive results. The variance is on the high side here though so you may have to wait some time to trigger the bonus round.

If the Greek gods are smiling though, Poseidon’s trident can deliver some mighty entertainment. Theme wise, there are plenty of games based on Greek mythology with WMS’ Zeus a must.