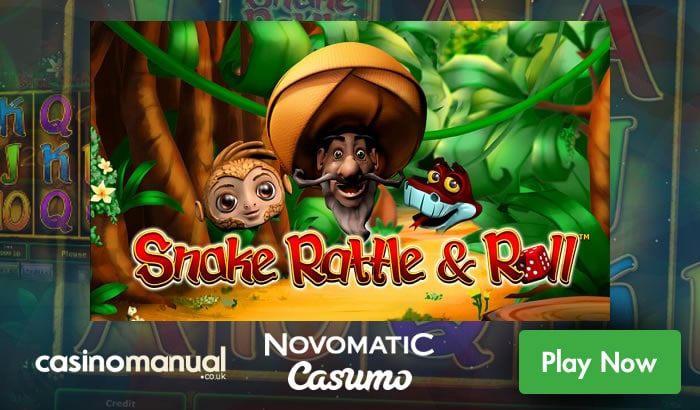 Casumo Casino has another new Novomatic video slot to play – read all about Snake Rattle & Roll as you join the snake charmer in faraway India.

Snake Rattle & Roll is powered by Novomatic and is a 5 reel, 20 payline progressive jackpot video slot with a classic board game element. Playable from just 20p a spin on desktop, mobile and tablet devices, the game is set in exotic Indian. It has cartoon graphics and is full of colour – it also has a superb pungi soundtrack.

In the base game, look out for the red snake symbol as this is the wild – as well as replacing all other symbols, it will trigger the Sliding Wilds feature as the snake slithers up, down or across leaving a trail of wild symbols. The snake charmer to the side of the reels will also randomly add extra wilds to the reels which can then becoming sliding reels.

There’s also a Snakes and Ladders feature where you play the classic board game, Snakes and Ladders. You get to roll the dice to move along the board to win cash bonuses, added wild symbols and free spins. If you reach the top of the board, you will win the progressive jackpot! You can also win extra dice rolls to help you reach that target.

Any free spins you collect will play out in the Free Spins feature alongside the extra wilds you’ve earned – once in, you can play on a 20, 40 or 50 payline reel set. Look out for baskets landing on the rightmost reel as these will give you extra free spins. For more details, visit the Snake Rattle & Roll video slot review where you can also try for free.

Not played at Casumo Casino? They have an extensive Novomatic portfolio with more than 110 titles on offer – you have classic games like Lord of the Ocean and Book of Ra Deluxe as well as volatile offerings like Kingdom of Legend, Red Lady and Dragon’s Deep.

They also have video slots from NetEnt, NextGen Gaming Microgaming, IGT, Quickspin, Thunderkick, WMS, Barcrest, Yggdrasil Gaming, ELK Studios, Blueprint Gaming and many others. Sign up to get 200 Starburst free spins and up to £1,200 free.