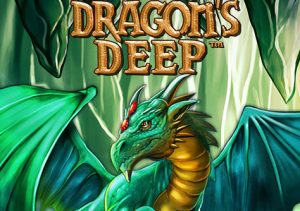 WHERE TO PLAY Dragon’s Deep SLOT

Fire-breathing creatures and marauding Norse-style warriors are the stars of Dragon’s Deep, a simple, volatile video slot from Novomatic. Played using a 5 a reel, 25 payline game engine, this well-designed game comes with a cracking bonus round that awards up to 50 free spins where all warrior symbols become wild. Start your quest, on all devices, from between 25p and £100 per spin.

Classy visuals and Novomatic aren’t words that often appear in the same sentence but that’s what’s on offer in Dragon’s Deep though. The imagery has a fantasy feel and includes lower value A to 9 playing cards, an axe and hammer and a treasure chest full of gold coins. They’re joined by 3 Viking-style warriors, each of whom pays 5, 25, 250 or 500 coins if you land 2, 3, 4 or 5 on the same payline.

Helping create winning combinations is the dragon which is the game’s wild – it replaces all other symbols apart from the dragon egg scatter. The wild also offers awards of 10, 50, 300 or 1,000 coins in its own right.

The dragon egg scatter is potentially the most rewarding symbol. Land 3, 4 or 5 of them anywhere on the reels and you’ll win a payout equal to 5, 20 or 100 times your total stake. You’ll also trigger the game’s Free Games feature and with it, 5, 10 or 25 free spins.

Every time 1 of the wild Norse warriors lands during the feature, it will become a wild. You can re-trigger more free spins here too by landing 3 or more scatters on the same free spin giving you a total of 50 free spins.

We’re sometimes a bit sniffy about Novomatic video slots. Chiefly the design of them. Some of human characters in many of their games have a slightly deranged look. There’s none of that here though as the imagery is very nicely crafted and the overall look impresses.

The Austrian developer usually keeps the gameplay simple and that’s certainly the case here. The free spins round is a good one though and the added wilds can quickly delivery a hefty payout punch. The variance stands in the medium to high range.

This fantasy-themed video slot is an impressive performer, combining some better than average design with a cracking bonus round. If that sounds like a winning combination, then you’ll want to give Dragon’s Deep a closer look. Additionally, Kingdom of Legend from Novomatic is excellent and also has a fantasy theme.