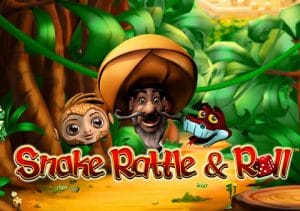 A humble board game gets an Indian twist in Snake Rattle & Roll, a 5 reel, 20 to 50 payline jackpot video slot from Novomatic. Look out for spreading wilds and a feature round based on the snakes and ladders game that awards cash prizes, free spins and added wilds as well as a shot at a progressive jackpot. Stakes range from 20p up to £100 per spin.

We were pleasantly surprised when we fired up Snake Rattle & Roll – Novomatic powered games are rarely a treat for the senses but the design here is rather good. A jungle setting forms the backdrop to the reels which are dominated by playing card values and the Snake Rattle & Roll logo which can land fully stacked.

They’re joined by a red snake which is the game’s wild – this can land on any reel and slither up, down or across and leave a trail of wilds where it slides. This is the Sliding Wilds feature. The snake charmer can appear at random and add extras sliding wilds to the reels too – this is the Snake Charmer Bonus feature.

Look out too for the pair of dice – land 3, 4 or 5 of these anywhere on the reels and you’ll trigger the Snakes and Ladders feature. You’ll then get to play a game of snakes and ladders – roll the dice to work your way along the board. In the process, you can collect cash prizes, free spins and added wilds.

Make it all the way to the summit of the board and you’ll trigger the progressive jackpot. The number of rolls you get depends on how many dice scatters triggered the feature. You can add to your tally by collecting extra rolls on the snakes and ladders board.

When your rolls run out, you’ll get to play any collected free spins, complete with any added wilds and bonuses in the Free Spins feature – you can choose to play on a machine that has 20, 40 or 50 paylines. You can add to your free spins total by collecting baskets that land on reel 5 only – collect 5 of them and you’ll get to pick from the baskets to reveal how many extra free spins you’ve been given.

Snake Rattle & Roll is quite an impressive video slot and much better than we were expecting. The imagery and animations are nicely drawn and the sitar-heavy soundtrack certainly enhances the atmosphere. The features offer a nice variety too. Expect to see the sliding wilds often in the base game – the snakes and ladders board provides plenty of action too.

Snake Rattle & Roll exceeded our expectations – combining good design and a decent array of features, it’s an entertaining and very playable package and 1 passage to India we’re happy to recommend. If you like Eastern themed games, Playtech’s Sultan’s Gold and Novomatic’s Golden Cobras Deluxe are worth trying.