If you’re a fan of the exceedingly popular Age of the Gods series of progressive jackpot video slots from Playtech then Paddy Power Casino is the place to be as it’s just launched the latest instalment – Age of the Gods: Mighty Midas.

The ancient Greek king’s golden touch was a curse but it could prove to be a blessing in this entertaining and highly volatile new 5 reel, 25 payline video slot. The design here will be familiar if you’ve played any of the other Age of the Gods games – however, the gameplay here offers something a little different though.

Central to the action is the Monty Python-style giant golden finger which can land on reels 3, 4 or 5 only. Whenever this Midas Touch symbol hits, it turns the symbol directly to its left into a wild. A symbol drop follows and a new payout consideration is made. Land a Midas Touch symbol next to a golden wild and you’ll also bring a multiplier into play which can double or even treble payouts.

Mighty Midas also comes with 5 bonus features which are triggered by landing the pentagram on reels 1 and 5 on the same spin:

Of course, Age of the Gods: Mighty Midas is part of the Age of the Gods Jackpot Network so you’ll also have a shot at scooping a potential progressive jackpot prize – the Ultimate Power jackpot is worth over £362,000! Even if you don’t win a jackpot, ever Ruby free spin can reward you with up to 8,650 times your bet!

The Age of the Gods video slots have been a bit hit and miss but Age of the Gods: Mighty Midas definitely hits the target. The classy design is terrific and the range of extras delivers plenty of variety. It’s a feisty game too.

Age of the Gods: Mighty Midas is out now at Paddy Power Casino. New players who deposit £10 will get a £40 bonus as well as 20 wager-free free spins. You could also opt for a 200% first deposit bonus up to £200. 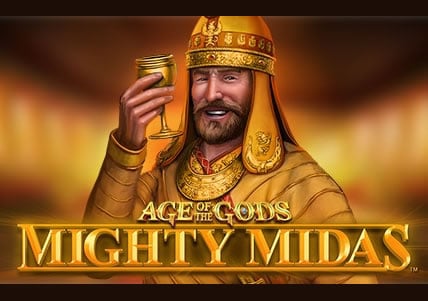 Age of the Gods: Mighty Midas