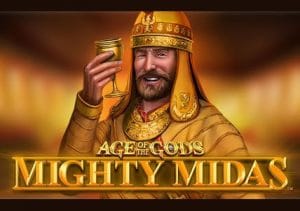 WHERE TO PLAY Age of the Gods: Mighty Midas SLOT

In the famous Greek myth everything touched by King Midas turned to gold. What was a curse for his majesty could be just the opposite in Age of the Gods: Mighty Midas, another video slot in Playtech’s popular Age of the Gods series. It’s a highly volatile 5 reel, 40 payline game that comes with plenty of wild extras and 6 bonus features. Play on all devices from 40p to £2,000 per spin.

As you might expect from a video slot called Age of the Gods: Mighty Midas, there’s plenty of gold on show here. The images on the reels conjure up a bacchanalian feast and include bunches of grapes, goblets of wine, apples, roses and a roast chicken. More rewarding are the 5 character symbols. The smiling king is the top payer, delivering 12.5 times your stake if you land 5 on a payline.

Keep a special eye for the giant golden finger which appears on reels 3, 4 or 5 only. This is the Magic Touch symbol. Whenever this lands, it turns the symbol directly to its left into a wild. A symbol drop then takes place and a payout is made. If you land a Midas Touch next to a golden wild, the symbol gets a multiplier boost. A standard Golden Wild goes from 1x to 2x while a 2x golden wild turns into a 3x wild – this is called the Midas Multipliers feature.

The multi coloured pentagram is the scatter. This can hit on reels 1 and 5 only. Land 2 on the same spin and you’ll trigger 1 of 5 bonus features:

You’ll also have a chance to land a progressive prize here as Age of the Gods: Mighty Midas is part of the Age of the Gods Jackpot Network. This can trigger at random on any spin.

We enjoyed Age of the Gods: Mighty Midas. The design is as high spec as usual and there’s a terrific range of extras on offer. Be warned though, this is a very volatile video slot with top rewards of 8,650 times your bet on each Ruby Spin (due to the potential 30x multiplier).