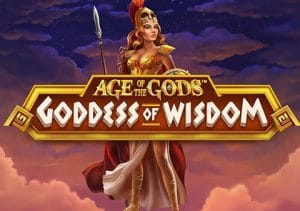 Age of the Gods Goddess of Wisdom: Demo

WHERE TO PLAY Age of the Gods Goddess of Wisdom SLOT

Athena is the latest ancient heroine to get the slots treatment as part of Playtech’s Greek myth and legend series. Age of the Gods Goddess of Wisdom is a 5 reel, 20 payline slot that offers 3 bonus features that award between 7 and 14 free spins with multiplier extras. Play from between 20p and £500 per spin.

The sound and visuals on show in the Age of the Gods series are usually top drawer and Goddess of Wisdom maintains those impressive standards – an ancient temple flanked by marble columns forms the backdrop to the reels whose symbols include playing cards, berries, sandals, laurel wreaths with warrior helmet, breastplate and the snake-haired Medusa. Athena herself is the wild, substituting for all other symbols apart from the White Owl scatter. The ancient world has rarely looked and sounded so good.

The main reason you’ll want to fire up Age of the Gods Goddess of Wisdom is the Battle Game feature – to trigger it, you’ll need to land 3 or more of the White Owl scatter symbol. In addition to a cash prize of 5, 20 or 100 times your total stake, you’ll also get to choose from 3 options:

When you make your pick, the 2 remaining symbols will be replaced on the reels by the one you chose. Say for example, you chose Medusa – all of the Warrior’s Helmet and Breastplate symbols are removed from the reels for those 10 free spins and replaced by Medusa. As the snake haired woman is by far the game’s top payer (5,000 coins for a 5 symbol combo), it suddenly becomes a much more tempting proposition.

Your winning chances are also boosted in the free spins feature by the presence of expanding wilds – whenever a wild hits, it will fill the entire reel in which it appears.

Age of the Gods Goddess of Wisdom also offers a shot at a potentially giant progressive jackpot – this round is triggered at random. You’ll be presented with a selection of gold coins. Keep picking until you land 3 the same. You’ll then win that named jackpot. There are 4 of them in total and you’re guaranteed to win at least 1 of them.

If you’ve played and enjoyed any of the other Age of the Gods video slots, you’ll find plenty to enjoy in this incarnation. The design is top notch as usual and there’s a quality free spins feature on offer. Add a progressive jackpot into the mix and you’d be wise to give Age of the Gods Goddess of Wisdom a spin. I also recommend Age of the Gods Fate Sisters which features 3 female gods.