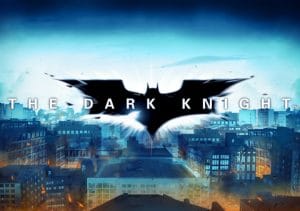 WHERE TO PLAY The Dark Knight SLOT

Join Batman and try and save Gotham City from the clutches of The Joker in The Dark Knight, a 6 reel, 50 payline video slot from Playtech. Based on the 2008 movie that starred Christian Bale as the Caped Crusader, it’s packed full of features including 2 different respin rounds and a trio of free spin bonuses with added extras. Stakes start at 20p, rising to a maximum of £15 per spin.

Playtech has created a fine-looking game here as the grimy Gotham City skyline forms the backdrop to the reels. There you’ll see lower value A, K and Q symbols alongside Commissioner Gordon Gary Oldman), Two-Face (Aaron Eckhart), Rachel Dawes (Maggie Gyllenhaal), Bruce Wayne (Christian Bale) and The Joker (Heath Ledger). The most rewarding symbol is Batman. Land 6 of these on a payline and you’ll pocket a 75 times bet reward.

The Bat is the game’s wild – it doesn’t offer any payouts but does substitute for everything apart from the pair of bonus symbols. The wild can hit anywhere on reels 2, 3, 4 or 5. If you like plenty of features, then The Dark Knight should appeal as there’s a good selection here.

Batman Respins feature – fill the whole of reel 1 with the Batman symbol to trigger this round. All Batman and Bat wild symbols from the triggering spin are held and a coin is tossed. If it lands on the Batman side, you’ll get another respin. Land on The Joker side and the respins are over and the payout calculation is made. Up to 8 respins with held symbols are possible here.

The Joker Respins feature -this round is virtually identical to the Batman Respins feature. To trigger it, you’ll need to fill reel 6 with the Joker. Hope to see the Joker rather than the Batman side of the coin in this round as it triggers the respins. Once again, up to 8 respins are possible.

The Dark Knight Free Games feature – 7 free spins are awarded if you land the Batman Bonus symbol on reels 2 and 3 on the same spin. Any Batman symbols turn wild during this round and remain in place for the duration of your free games.

Agent of Chaos Free Games feature – this round becomes active if you land the green Joker Bonus on reels 4 and 5 on the same spin. Again 7 free spins are awarded. The wrinkle here is the addition of giant Joker symbols which can combine to create some monster combinations.

Gotham City Free Games feature – this round offers the best of both the other free spin rounds. It’s triggered by landing the Batman Bonus on reels 2 and 3 and the Joker Bonus on reels 4 and 5 on the same spin. Again, you’ll receive 7 free spins complete with Batman symbols that turn into sticky wilds AND the oversized Joker symbols. If a Joker overlaps Batman, it unlocks it and turns wild itself. These wild and combined symbols pay as the top value Batman symbol to offer even more winning chances.

Lastly, there are 4 progressive jackpots to be won – The Dark Knight is part of the DC Super Heroes Jackpot network which means you can win a progressive jackpot randomly on any spin. What you’re hoping for is the Grand Jackpot which offers 7 figure payouts, guaranteed.

Christopher Nolan’s reboots brought new life into what had become a tired superhero franchise. This video slot version is a good adaptation of some classy source material. The sound and visuals are nicely done and there’s plenty of gameplay on offer.

Fans of the film should find plenty to enjoy here. Even if Gotham City is a totally mystery, the combination of classy design and playable features make The Dark Knight well worth a spin. I would also recommend you try other video slots in the DC Super Heroes network including Batman v Superman: Dawn of Justice, Justice League and Man of Steel.