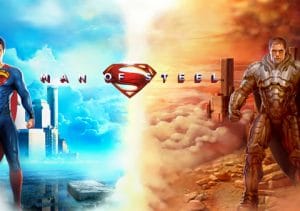 WHERE TO PLAY Man of Steel SLOT

Is it a bird? Is it a plane? No, it’s Man of Steel, a 5 reel, 25 payline video slot from Playtech based on the Henry Cavill incarnation of Superman. Lovely to look at, this adaptation is packed full of features including shifting wilds, 2 free spins rounds with spreading and sticky wilds as well as a special bonus that can add up to 7 extra wilds to the reels. You’ll also get a shot at claiming a big progressive jackpot. Don your virtual lycra from 50p to £2,5000 per spin across all compatible devices (including iOS, Android and laptops/PCs).

We didn’t much care for the 2013 film Man of Steel – this video slot adaptation is a far more entertaining affair. The design is as top end as you’d hope from a tie-in between major software and film studios. Lower value symbols include Clark Kent’s letter box and specs, a camera, a copy of the Daily Planet newspaper, a school bus (just waiting to be rescued!) and a military jet.

That payout is on offer from the 5 potential wild symbols – Superman, Captain Zod (Michael Shannon) and his warriors all substitute for all other symbols bar the bonuses.  As we mentioned in the intro, there’s plenty to get stuck into here on the features front.

Superman vs General Zod Shifting Wilds feature – when the Superman wild lands, he will shift 1 space directly to the right on the following spin. These shifts continue until he drops off the right-hand side of the reels. General Zod has similar powers – he shifts to the left rather than the right though. Expect fireworks if they both land on the same row!

Battle for Earth Free Games feature – this feature is triggered when Superman and General Zod wilds land on the same space. Once triggered, the shifting wilds will again be in play. If Superman lands next to Zod or 1 of his warriors, they will go into battle. Extra wilds are added if Superman wins the fight. The free spins keep on coming until Superman loses a battle with Zod and his gang.

Krypton Free Spins feature – you’ll notice a Krypton Bonus symbol which can land on reel 5. When it does, you’ll be awarded 7 free spins. These play out on a new set of reels that includes higher value symbols and 50 paylines. The symbol you’ll be hoping to see is Jor-El (Russell Crowe) who is wild – he locks in position every time he lands. Up to 10 frozen wilds are possible. You can retrigger the feature too giving you an extra 7 free spins – the wilds will disappear but any new Jor-El wilds lock in place with up to 10 possible.

Man of Steel also offers a shot at winning a potentially life-changing amount of cash as it forms part of the DC Super Heroes Jackpot network. This feature can trigger randomly on any spin. Once active, pick symbols from the matrix. Match colours to win 1 of the Mini, Minor, Major or Grand Jackpots. The Grand Jackpot offers you 7 figure sums!

We found Man of Steel to be a highly enjoyable video slot. The visuals are super slick and the soundtrack has a suitably epic feel. The features match the good looks too and offer plenty of variety.

The spreading wilds are the key to the game and offer plenty of action in both the base game and the Battle for the Earth Free Games feature. The sticky wilds in the Krypton Free Games feature is where the big wins will come from and the World Engine Bonus feature can offer some explosive boosts.  This superhero-themed video slot is a good one. Combining classy design with a range of innovative extras Man of Steel gets a big thumbs up.