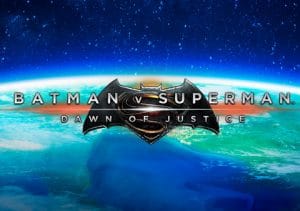 WHERE TO PLAY Batman v Superman: Dawn of Justice SLOT

2 giants of the superhero world collide in Batman v Superman: Dawn of Justice. Based on the 2016 movie starring Ben Affleck and Henry Cavill, it’s is a 5 reel, 25 payline video slot from Playtech that comes with shifting wilds, 2 different free spins rounds and a progressive jackpot element. Play on all devices from between 25p and £2,500 (for the Bruce Waynes of the world) per spin.

Produced in association with film studio Warner, there’s a suitably high-end look to the visuals here. The imposing Metropolis skyline forms the backdrop to the reels which see Batman and Superman perched either side. Those reels include the Daily Planet, a camera, peach tea, a sword and shield, the Batmobile and Kryptonite symbols. More rewarding are Martha Kent (Diane Lane), Alfred the butler (Jeremy Irons) and arch baddie Lex Luthor (Jesse Eisenberg). The top paying standard symbol is the Batman/Superman logo which pays 3, 8 or 50 times your bet if you land 3, 4 or 5 in combination.

Those same amounts are also on offer if you land any of the 4 wilds symbols in combinations – the Batman (Affleck), Superman (Cavill), Wonder Woman (Gal Gadot) and Doomsday symbols are all wild. Those wilds are central to the feature action on offer in Batman v Superman: Dawn of Justice.

Shifting Wilds feature – land either the Superman or Batman wilds and they will turn into shifting wilds. Batman shifts 1 space to the left with each spin, Superman moves 1 space to the right. They both remain on the reels until they reach the outer reels (Batman on reel 1 and Superman on reel 5).

Batman v Superman Free Games feature – to trigger this round, you need to land Superman and Batman on the same row with the Batman wild appearing to the left of the Superman wild. An initial haul of 8 free games awarded. Then choose either Batman or Superman. The shifting wilds are in play again – when the superhero wilds meet, a battle ensues. If your superhero wins, 4 extra free spins are added to your tally and more wilds come into play.

Dawn of Justice Free Games feature – this round becomes active when a fully stacked Doomsday wild fills the whole of the middle reel. Doomsday then appears stacked on reel 5 to start the free spins before shifting 1 reel to the left with each free spin. Hope to see Superman, Batman or Wonder Woman appear though as they block Doomsday and move the stacked wild back 1 reel. The round ends once Doomsday reaches reel 1. When it does reach reel 1, it will duplicate to take over both reels 1 and 2 for your last free spin.

As part of the DC Super Heroes Jackpot Network, Batman v Superman: Dawn of Justice offers a shot at landing a potentially life-changing sum of cash. The jackpot round triggers at random – then choose icons from a grid which will determine whether the Mini, Minor, Major or Grand prize is awarded.

The movie version of Batman v Superman: Dawn of Justice took a bit of a mauling from the critics but we found plenty to enjoy here. The sounds and visuals are well done and there’s a decent range of extras on offer. We enjoyed our best success with the Doomsday free spins, pocketing well over 850 times our stake after the super hero wilds worked their magic.

If you enjoy the superhero theme or just fancy a video slot that offers some interesting bonus features then Batman v Superman: Dawn of Justice is well worth a look. If you like super heroes, you can join The Flash, Cyborg, Aquaman, Wonder Woman, Superman and Batman in Playtech’s Justice League.