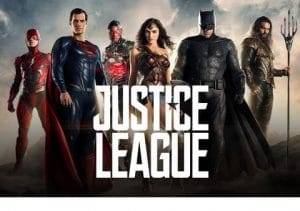 WHERE TO PLAY Justice League SLOT

Launched to coincide with the cinema release of the blockbuster film of the same name, Justice League is a 5 reel, 40 payline superhero-themed video slot from Playtech. Not to be confused with the similarly named game from NextGen Gaming, this Playtech version is a straight movie tie-in that comes with high spec sound and visuals, plenty of bonus feature extras and 4 progressive jackpots. Join Batman and friends on your desktop, tablet or mobile device from 40p to £2,000 per spin.

As you’d expect from a big money partnership between Playtech and Warner Bros., no expense has been spared on the design of Justice League. You’ll see The Flash, Cyborg, Aquaman, Wonder Woman, Superman and Batman spinning around the reels as well as each super hero’s logo. Batman is the best of the standard symbol, paying up to 500 coins. The JL logo is the wild – it offers awards of up to 750 coins per payline as well as replacing all other symbols bar the scatter. All of the super hero symbols and the wild can land fully stacked on all reels.

There are 7 main extras on offer in Justice League – re-spins and 6 free spins features. Let’s get right to it:

Super Hero Respin feature – these are triggered at random in the base game. During a re-spin, 1 of the superhero symbols becomes wild. It’s possible to land up to 5 respins in a row which will turn 5 of the super hero symbols wild with potentially spectacular results.

Free Games features – we’re doing Justice League a bit of a disservice if we say that it comes with some free spins. In fact, it offers 6 different features! Each 1 is based on a specific superhero and comes with its own wild extras. To start with, only The Flash Free Games feature is unlocked. The more times you land the free spins, the more options are opened:

Cyborg Free Games feature – the number of free spins offered here drops to 12. Don’t worry though, there’s extra Feature Frame action on offer. As usual, any superhero that lands in the Feature Frame turns matching symbols wild. An extra Feature Frame is added to the reels on each free spin where a super hero doesn’t land in the Frame. This boosts your chances of adding a big cluster of wilds. Once again, re-triggers are possible.

Aquaman Free Games feature – this round awards 10 free spins. Any symbol (not just a superhero symbol) that forms part of a winner that lands in the Feature Frame turns all matching symbols wild. Re-triggers can hit here too.

Wonder Woman Free Games feature – 7 free spins are awarded in this feature. Between 1 and 5 Feature Frames appear on each 1 of them, greatly boosting you chances of landing multiple wilds on the same spin. As usual, re-triggers are possible.

Superman Free Games feature – the Man of Steel awards 5 free spins. As usual, any superhero that lands in the Feature Frame turns all matching symbols wild. That Feature Frame is a massive 2×2 block, making it much easier to add even more wilds. There are no re-triggers here.

Batman Free Games feature – the Caped Crusader will get you just 2 free spins. How can that possibly be the best feature? It comes with some pretty tasty extras. Any superhero that lands in the Feature Frame turns ALL superhero symbols wild, not just matchers. These stacks of wilds can deliver some gargantuan awards. Re-triggers aren’t possible here sadly.

Justice League is also part of the DC Super Heroes Jackpots network – this is triggered at random. Pick icons to win 1 of the Mini, Minor, Major or Grand Jackpots and a potentially life-changing sum of money. We found the variance here to be be pretty high so plenty of patience and a good bankroll are recommended.

The film version of Justice League hasn’t exactly wowed critics. The video slot adaptation should be a big hit though. The visuals are excellent and the soundtrack has a real Hollywood feel. There’s a cracking range of extras on offer too. The best potential comes via the Free Games features, especially the volatile Batman round where multiple wilds can reap rich rewards. Our advice would be to give a trip to the cinema a miss and do battle with this version of Justice League instead.