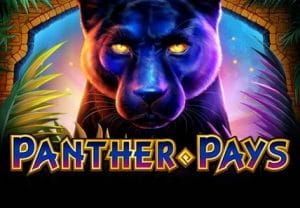 WHERE TO PLAY Panther Pays SLOT

A big cat can deliver big rewards in Panther Pays, a colourful 5 reel, 50 payline video slot from Playtech. This jungle adventure comes with a bonus round that awards up to 15 free spins. Wilds are added to reels 2, 3, 4 and 5 on each free spin which can really boost your opportunities by the end of the feature. Stakes range from between 50p and £500 per spin.

Playtech has kept things pretty simple in Panther Pays. Set against a jungle backdrop, you’ll see A to 9 symbols as well as a range of exotic animals spinning around the reels. In order of value are the frogs and monkeys that pay up to 3 times your bet per payline. Next come the parrots and totem masks. Land 5 of either of these symbols in combination and you’ll pocket 4 times your bet.

The most lucrative symbol is the black panther which delivers 10 times your bet if you land 5 in combination. The black panther spins in full stacks so there are chances to fill multiple reels on the same spin.  Able to land anywhere apart from reel 1, the diamond is the wild. This doesn’t offer any pays in its own right but it does replace all other symbols bar the scatter.

The gem encrusted golden brooch is the scatter. Land 3, 4 or 5 of these anywhere on the reels on the same spin and you’ll receive a payout equal to 5, 20 or 100 times your total bet. You’ll also trigger the Free Games feature and with it, 10 free spins.

On each of those free spins, a lightning bolt will strike and add an extra wild to the strip of symbols on reels 2, 3, 4 and 5. All those extra wilds can really come into play in the closing stages of the free spins. Hope to see 3 scatters land too as it will add another 5 free spins to your tally.

Despite the rather exotic setting, you won’t find much that’s outlandish about the gameplay in Panther Pays. The action here is very straightforward. The bonus round has its charms though thanks to the possibilities opened up by the extra wilds. Saying that, you can only win 250 times your bet on every spin or free spin.

The sound and visuals are as simple as the gameplay. Panther Pays is bright, bold and colourful and the stripped back soundtrack gives the game a slight retro feel. Panther Pays probably won’t be for you if you’re after a game that comes with plenty of bonus features.

If it’s simple, jungle adventure you want, then you’ll find that here. Playtech has produced many better video slots including the excellent Suicide Squad and Justice League which are based on the blockbuster movies.