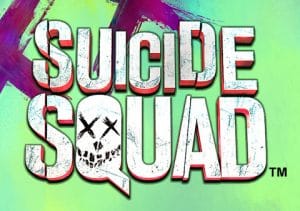 WHERE TO PLAY Suicide Squad SLOT

Join a band of villainous anti-heroes in Suicide Squad, a 5 reel, 50 payline video slot from Playtech. Based on the DC Comics movie of the same name, this game comes with plenty of wild extras as well as offering a chance to win 1 of 4 jackpot prizes. Play on your PC, tablet or mobile from between 50p and £500 per spin.

If you’ve seen the 2016 film Suicide Squad, then you’ll find plenty that’s instantly recognisable in this video slot version. The purple reels are made up of an assortment of lower value weapon-based symbols including swords, knives, baseball bats and crosses. Potentially more rewarding are the 5 members of the Suicide Squad which spin in full stacks.

The gameplay here is pretty simple but there are a couple of extras that should pique your interest. First up is the Suicide Squad Wilds feature – land 1 of the 5 Suicide Squad members in a fully stacked formation on any reel to trigger these. You’ll then see some dog tag wilds added to the reels.

Suicide Squad also offers the chance to land potentially life-changing sums as it’s part of the DC Super Heroes Jackpot network. The Jackpot Game feature can trigger at random on any spin. Play the pick me round which will then determine whether you win the Mini, Minor, Major or Grand Jackpot.

Like most movie tie-in video slots, plenty of effort has been thrown into the design of Suicide Squad. It has a slightly grungy feel which fits the subject matter rather well. The guitar heavy soundtrack does too but it’s very repetitive and had us reaching for the mute button.

The gameplay in Suicide Squad is very straightforward. There aren’t any free spins here but the wild extras hit regularly enough to keep the pace high enough. The best opportunities arise from the Enchantress Mode feature where all the extra wilds and 2x multiplier can have a big impact.

Comic book fans should find plenty to like here. The wild extras make Suicide Squad worth a look, even if you’ve never heard of Deadshot, Harley and the rest of the gang. I would also play Justice League (from Playtech) which offers more in the way of bonus features.