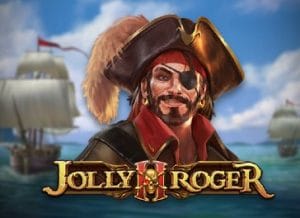 WHERE TO PLAY Jolly Roger 2 SLOT

Take to the high seas and go battle Armadas in the Jolly Roger 2 slot. This sequel to 2012’s Jolly Roger has been created by Play ‘n GO and comes with plenty of extras.  Look out for the ship’s compass which can appear at random on any spin and award a multiplier boost of up to 10x.  Landing 3 scatters triggers the Bonus Quest features. Pick from the treasure maps to reveal what feature you’ll play. On offer are instant win cash prizes, a trio of free spin rounds complete with modifiers.  Did this shiver our timbers? Find out in our detailed Jolly Roger 2 review.

On the reels, you’ll see metal A to 10 royal values alongside a skull ring, a cross and a trio of diamonds. The top standard symbol is the treasure chest overflowing with gold and jewels. Land 3, 4 or 5 of these on a payline and you’ll receive a payout equal to 2, 5 or 10 x your total bet.

Those same amounts are also on offer from the pirate skipper wild who is sporting a mighty tricorn hat and eye patch combination. It can land on all 5 reels and substitutes for all the standard symbols in a winning combination.

You can play Jolly Roger 2 on all devices including PC, tablet and mobile. The bright imagery stands out nicely and you’ll have no difficulties playing on a smaller screen device.

The Jolly Roger 2 slot is played using a simple 5 reel, 20 payline game engine. A win is formed when you see 3 or more identical symbols from left to right on a payline, starting from reel 1.

You can play at bet levels that start at 20p per spin, rising to a maximum of £100 per spin. You’ll find all the usual autoplay options here.

Like most slots in the Play ‘n GO catalogue, the Jolly Roger 2 RTP is 96.2% which is just above average. This pirate adventure isn’t as swashbuckling as some other slots from this developer. The Jolly Roger 2 volatility is in the medium range. On a scale of 1 to 10, the variance is about 6.  The max win is 5,000 x your total bet.

There’s a decent selection of extras on offer in Jolly Roger 2. The ship’s compass can deliver multipliers of up to 10x in both base game and bonus play. Trigger the Bonus Quest features for a cash prize or play 1 of 3 free spin features.

On any winning spin you could benefit from a Compass Multiplier. This is applied to your total win and can boost the payout by 2x, 3x, 5x, 8x or 10x.

Trigger the Bonus Quest features by landing 3 scatters on the same spin. You’ll then get to choose from a grid of 12 treasure maps. Keep picking until you land 3 that match. You’ll then go on to receive that bonus feature. There are 4 potential extras on offer:

This does exactly what it says on the tin, awarding a cash prize of between 2 and 20 x your total bet. The Compass Multiplier can hit here so you could get a further payout boost. The max win would be 200 x your total bet.

Here, you’ll get a single free spin. First make a pick from the bottles of rum which could deliver a wild reel. Keep picking until you discover a poisoned bottle or you achieve 5 wild reels.

You’ll then play the free spin with any wild reels you’ve added. The Compass can become active in this round too to provide a multiplier boost.

In this free spins round, you’ll go into battle with the Dutch, Portuguese and British Armadas. Whoever lands the most gold coins on the 3×3 grid wins.

If it’s you, you’ll win a free spin with a special Pirate Victory Reward and Compass multiplier. If you lose the battle, you’ll lose a life and play a free spin with a wild reel. The round continues until you’ve lost all 3 of your lives.  The pirate victory rewards are as follows:

This is another free spins round where you’ll try and collect maps and in the process uncover buried treasure. You’ll start with 10 free spins.

Collect 4 fragments of the map to discover the treasure, which is a modifier that remains active for the rest of the round. These include symbol upgrades and compass multipliers up to 10x.

The pirate theme remains a hugely popular one with slot players and developers alike. Trying to deliver a fresh take on a classic theme isn’t always easy but Play ‘n GO has made a decent attempt here thanks to the variety of features on offer.

Add the compass multipliers and the classy design into the mix and you have a solid overall package. There’s nothing revolutionary on offer here but the Jolly Roger 2 slot is still one to consider if you like the seafaring theme. If you want more pirate action, the Rage of the Seas slot by NetEnt is also worth heading to sea for.

What is the Jolly Roger 2 RTP?

As is the case with most slots in the Play ‘n GO catalogue, the Jolly Roger 2 return to player rate is 96.2% which is slightly above average.

What is the Jolly Roger 2 max payout?

The most you can win from a single spin is 5,000 x your total bet. These waters aren’t particularly shark-infested when it comes to variance. The Jolly Roger 2 volatility is in the medium range. On a scale of 1 to 10, the variance is about a 6.

Is there a Jolly Roger 2 free spins round?

Yes, there are 3 free spin features in fact. They’re triggered via the Bonus Quest features where you pick treasure maps to reveal your feature. The free spins come with an assortment of modifiers including wild reels and potentially, multipliers of up to 10x.

How does the Battle Free Spins feature work?

In the Battle Free Spins feature, you battle the British, Portuguese and Dutch armadas on a 3×3 grid. If you win, you get a free spin with a Pirate Victory Reward (transforming symbols, extra reels or synced reels) as well as a compass multiplier up to 10x. If you lose, you get a free spin with a wild reel. The feature ends when you lose your lives.