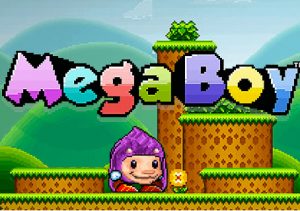 WHERE TO PLAY Mega Boy SLOT

Looking like it’s come straight from a handheld console like a Gameboy, Mega Boy is a retro-tinged, 5 reel, 25 payline slot from iSoftBet. With classic 16-bit graphics, we half expected Mario, Sonic or even Paperboy to make a cameo appearance. This slice of old school goodness comes with a pair of power up feature that deliver free spins with plenty of extra treats. Available on all devices, play from between 25p and £50 per spin.

Blocky graphics are usually something of a no-no in today’s slick, HD powered video slots. In the case of Mega Boy, they work a treat though. The reels include arcade style playing cards from A to 10, a lucky 7, bell, star, heart and cherries as well as a wild that substitutes for all other symbols. The action plays out to a classic electronic style soundtrack that’s a catchy complement to the retro theme.

Find the orange character, who pays more than a passing resemblance to Mr Tickle, in the centre position of the middle reel for the Level One Power Up which awards 10 free spins. As the games play out, keep your eyes peeled on the spinning meter in the top right corner of the reels. Depending on where the cursor lands, you can be awarded an extra feature which will be applied to that spin.

They include a 2x multiplier, transforming adjacent symbols into wilds, wilds expanding to fill entire reels and a randomly chosen symbol turning wild wherever it appears. If the cursor lands on a blank, the free spin plays out as normal.

Land the purple character slap bang in the middle of the reels in the base game to trigger the Level 2 Power Up – this also awards 10 free spins. Extras on offer here include a 3x multiplier, diagonally copied wilds, spreading horizontal wilds and random symbol wilds. Just like Level 1, the extra you receive depends on where the cursor lands on the spinning meter.

The visuals and sound may seem a little basic to modern senses but they work rather nicely – the features are a good too with the power ups offering plenty of opportunities, especially the random wild transformations which delivered some impressive results for us.

If you ever owned a handheld console, then this slot will appeal. If you come from the iPhone generation, get a little history lesson while you’re trying to win! In terms of similar video slots, there’s not really that are quite the same – however, Blueprint Gaming’s Worms is based on the iconic PC game from the 90s.