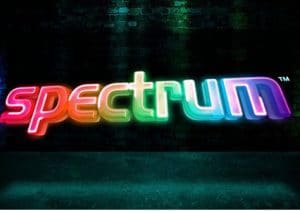 WHERE TO PLAY Spectrum SLOT

Spectrum is a classic fruit machine that’s been given a very colourful overhaul. Powered by Novomatic, it’s a 5 reel, 243 ways to win video slot that comes with the developer’s Reel Locking feature that sees at least 2, and sometimes more, matching reels on each spin. Play, on all devices, from between 50p and £75 per spin.

The design in Spectrum has its roots in an old school fruit machine – the visuals have been given a neon-style, HD overhaul though. It all looks very impressive, especially as it’s a video slot from Novomatic. On the plain black reels, you’ll see fluorescent-style A to 9 playing cards alongside cherries and single, double and treble bars.

The best of the standard symbols is the rainbow prism. Land 3, 4 or 5 of these on successive reels and you’ll win an award equal to 2, 10 or 40 times your total stake. Helping your winning chances is the wild – it can land on reels 2, 3, 4 and 5 and replaces all other symbols.

If you’re after a game with loads of extras you’ll be left wanting with Spectrum – a lack of features doesn’t make this a boring game though. It’s far from it in fact – on each spin, you’ll benefit from the Reel Locking feature. Here 2 adjacent reels will spin and deliver matching symbols. Better still is when the Reel Locking feature expands and offers 3, 4 or even 5 matching reels.

The lack of free spins and other extras will no doubt put some players off – we weren’t though. The Reel Locking feature delivered plenty of action and kept the pace high.

Novomatic is well known for its classic fruit machine re-boots – Spectrum keeps to those old school roots but comes with excellent visuals and an unusual feature which certainly freshens things up. We weren’t expecting much when we opened up Spectrum. We were pleasantly surprised though, both in terms of design and playability.

If you’re looking to add a splash of colour to your fruity action then Spectrum offers just that. If you want free spins, Novomatic has plenty of options with Dynasty of Ra recommended.