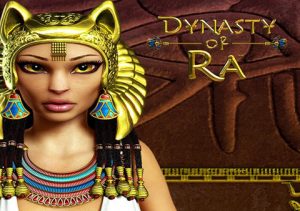 WHERE TO PLAY Dynasty of Ra SLOT

Based on the life of Bastet, daughter of the Egyptian god of the sun, Dynasty of Ra is a 5 reel, 10 payline video slot from Novomatic. It comes with a bonus feature that awards 10 free spins complete with expanding symbols. Head to the land of the pyramids, on all devices, from between 40p and £30 per spin.

In ancient mythology, Bastet was a cat goddess and the feline theme is evident in the reels – joining the A to 10 playing cards are a series of traditional objects and characters that been given the odd cat-like flourish. Look out for musical instruments, face masks and necklaces. The cat statue awards payouts of up to 50 times your stake. Most rewarding of all is Bastet herself who pays 1, 5, 20 or 100 times your total stake if you land 2, 3, 4 or 5 on a payline.

The Eye of Horus hieroglyph serves a dual purpose, acting as both a wild and a scatter – 3, 4 or 5 of these anywhere on the reels awards 2, 20 or 200 times your total bet. They will also unlock the Free Games feature and with it, 10 free spins.

A haul of 10 free spins may sound a little meagre but there are surprises in store here though. When a symbol forms a successful left to right winning payline, the symbols will expand to fill the whole reel. Do this with 1 of the higher value symbols and you can quickly build up an impressive amount of treasure. The key to winning big is to get a wild on various reels which will give you various wild reels.

The design of Dynasty of Ra is typical Novomatic – you’d be hard pressed to call it a thing of beauty. Set against plain black reels, the images are nice and sharp though. The soundtrack is a hybrid, mixing the developers usual bangs and bleeps with the occasional Arabian wail.

The best action here comes via the Free Games feature where the expanding symbols can have a big impact. The variance is in the medium to high category.

The appetite for Egyptian themed video slots seems to be insatiable – Dynasty of Ra doesn’t offer anything revolutionary but what it does, it does well. It’s not a classic but the combination of simple design, fast-paced action and a potentially explosive bonus feature make this trip to the desert one worth making. I also recommend you try some of Novomatic’s other similarly themed games like Book of Ra Deluxe 6 and Pharaoh’s Ring.