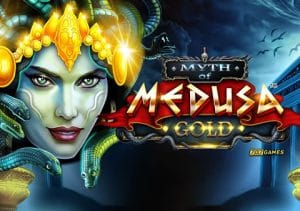 WHERE TO PLAY Myth of Medusa Gold SLOT

Catch the eye of Medusa and she could turn you into stone? Can the Gorgon lead you to a jackpot though? That’s the goal in Myth of Medusa Gold, a 5 reel, 25 payline video slot from Novomatic. The likeliest way to do that comes via the bonus round that awards free spins with sticky wilds. You could also trigger the Mirror Bonus where the 3 central reels are filled with matching symbols. Play this low to medium variance game on your computer, tablet or mobile from between 25p and £50 per spin.

Recent releases from Novomatic have been well designed and Myth of Medusa Gold is another impressive looking and sounding games. Set against a backdrop of marble columned building, you’ll see A to 9 playing card values spinning around the reels alongside vases, a warrior’s helmet and a pair of winged horses.

Perseus, the slayer of Medusa according to legend, is the best standard symbol, awarding 0.4, 1 or 2.4 times your bet if you land 3, 4 or 5 across a payline in the base game. Medusa is the wild. She replaces all the standard symbols as well as paying up to 3.2 times your total bet per payline.

The base game action is pretty standard but the game can come to life when you trigger the Free Games feature. Free Land the Bonus symbol on reels 1 and 5 on the same spin and you’ll receive 7 free spins. Joining the action here is a second, red, wild symbol. Every time 1 of these lands, it turns sticky and stays in place for any free spins you have left.

Land a Bonus symbol during the feature and it too turns into a sticky wild as well as adding an extra free spin to your total. Keep a special eye out for the mirror symbol. If this lands on reel 3 during the free spins, you’ll activate the Mirror Bonus feature. 1 symbol is picked at random 0 this will then fill all of reels 2, 3 and 4 which offers the chance to land some big combinations.

The other symbol to look out for is the overlay Jackpot symbol. Collect 6 of these and you’ll enter the Jackpot Bonus Game feature where you’ll win the progressive jackpot.

All about the jackpot

This isn’t the first appearance for Medusa in an online video slot. It’s a pretty good one though. The sound and visuals are top notch and the gameplay, though not massively original, is decent. Saying that, the maximum win per spin is a poor 80 times your bet in the base game!

Low to medium variance, the biggest wins will come from the progressive jackpot. Novomatic has released a superb looking game but the potential payouts make this a game to avoid. If you like the snake-haired gorgon, you can find her in NextGen Gaming’s Medusa MegaWays which has a lot more to offer (and big potential wins).