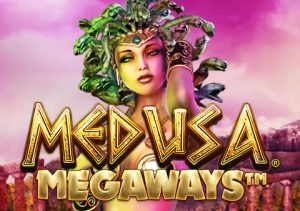 WHERE TO PLAY Medusa MegaWays SLOT

Medusa MegaWays is a Greek myth and legend-themed video slot from NextGen Gaming. Based on the snake-haired Gorgon, it’s played using the shape-shifting MegaWays game engine where the number of ways to win can be anything from between 324 right up to 117,649. Also in play are expanding wilds and a free spins round with a dynamic multiplier, wild reels and transforming scatters. Play on your PC, tablet or mobile device from between 25p and £62.50 per spin.

The design here is nicely done. Set against a backdrop of ruined marble columns and brooding purple skies the reels are made up of A to 10 royal values plus a selection of symbols relating to the myth and legend theme. The most lucrative symbol is the winged horse. Land 2, 3, 4, 5 or 6 of these on adjacent reels and you’ll pocket an award of 30 times your bet for 6 on a payline. Medusa herself is the wild.

Land a winner and the successful symbols are removed and new ones drop in from above to replace them. These ‘reactions’ continue as long as a new winning combination is created – this is called the Reactions feature.

NextGen Gaming has also packed a good array of extras into Medusa MegaWays.

We liked this ancient Greek adventure. The visuals are neat and tidy and there’s a suitably epic quality to the backing track. The gameplay stacks up pretty well too. The MegaWays game engine delivers plenty of action in its own right and is a nice idea to add to the classic Medusa video slot. The goodies in the Free Games feature impress too, especially if you manage a re-trigger or 2.

Then the dynamic multipliers can really come into their own and can provide wins of up to 50,000 times your bet on each free spin. If you like classical era video slots or you enjoy the MegaWays machine, then Medusa MegaWays is well worth investigating. I would also suggest you try Medusa II Jackpots which has a progressive jackpot element.