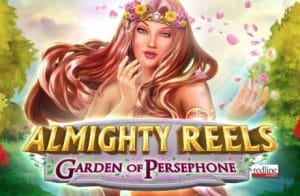 WHERE TO PLAY Almighty Jackpots Garden of Persephone SLOT

Another in Novomatic’s series of myth and legend themed video slots is Almighty Jackpots Garden of Persephone. Played using a 5 reel, 25 payline game engine, it comes with a bonus round that awards 10 free spins as well as a respin round where you could win 1 of 5 jackpot prizes. Play this low variance game on all devices from 25p per spin.

There’s nothing overly flashy about the design in Almighty Jackpots Garden of Persephone. It’s all decent enough though. Set against a garden backdrop, you’ll see lower value royal values as well as a horn of plenty, a harp, a vase and a helmet. Persephone is the most rewarding symbol, paying 1, 2 or 4 times your bet if you land 3, 4 or 5 in combination. There are 2 features in Garden of Persephone.

Free Games feature – this round is activated by landing 3, 4 or 5 scatters on the same spin. After a payout of 3, 10 or 50 your total bet you’ll go on to play 10 free spins. During this round, 1 randomly selected symbol will spin in stacked formation and appear in a giant 3×3 configuration.

Almighty Jackpots feature – land 6 or more coin symbols to activate this round. The coins lock in position and a number of respins follow. The number you’ll receive depends on the coins from the triggering spin. You’ll see that the coins come with cash values and jackpot prizes attached.

When the spins are completed, the prizes are added together to give your total prize amount. If you fill the screen with coins, the values are doubled. As well as cash prizes you could also land the Mini, Minor, Maxi, Major or Grand Jackpot prize if the coins fall nicely. The Grand Jackpot is the one you want as it’s worth 1,000 times your total bet.

This is fairly typical example of a Novomatic video slot. The design is pretty basic but does the job. The range of extras isn’t massive but there’s enough going on. What is slightly unusual is the variance which is much lower than you’ll find in many video slots from this developer.

You might expect a video slot set in a beautiful garden to be a tranquil affair. That’s the case here. It’s not the most explosive game but the simple gameplay is diverting enough. You can win up to 1,750 times your bet in the Almighty Jackpots feature is you get all the jackpots and the maximum coin values. It’s not enough for me to come back – I would rather play Medusa MegaWays from NextGen Gaming or Midas Golden Touch from Thunderkick.