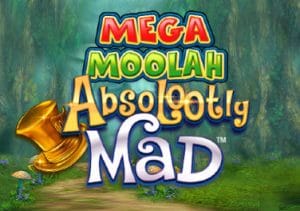 Loosely based on Lewis Carroll’s Mad Hatter character, Absolootly Mad: Mega Moolah is a progressive jackpot slot from Microgaming. It’s a 5 reel, 243 ways to win game that comes with rolling reels where each successive win increases a multiplier. Trigger the bonus round and you’ll win free spins where the values from the rolling reel multipliers are trebled and can get as high as 15x.The main attraction is of course, the potential riches on offer from the Mega Moolah progressive jackpots. Find out more in our Absolootly Mad: Mega Moolah review.

Many progressive jackpots slots are very simple. There’s more going on than you might expect in Absolootly Mad: Mega Moolah. The range of extras include rolling reels, expanding multipliers, free spins with bigger multipliers and a quartet of progressive jackpot prizes. Let’s have a closer look.

Land a winning combination and the successful symbols from that combination are removed. New symbols replace them and a payout calculation follows.

These reel rolls continue as long as a new winning combo is formed. Each successive reel roll win also increases a multiplier. The multiplier starts at 1x with you first win then rises to 2x, 3x and 5x with each successive win.

Land 3 free spin symbols (wilds count here too) on the first 3 reels on the same spin and you’ll activate the Free Spins feature. Your reward is 8 free spins. The Rolling Reels are in play during the feature, just like in the base game.

The multipliers are even better though. Instead of 1x, 2x, 3x and 5x, successive wins during the free spins round are boosted by 3x, 6x, 9x or 15x multipliers. You can keep track of the multipliers in the trail underneath the reels.

Re-triggers are possible too. These add another round of 8 free spins to your total. You can retrigger various times with up to 56 free spins up for grab altogether. Top of the bill as far as bonus rounds go is of course the Progressive Wheel feature. Wilds collected through a spin (and reel rolls) increases your chances of activating the bonus wheel. Once the round is triggered, you’ll be shown a wheel that’s divided into 20 coloured segments.

Spin the bonus wheel. Depending on where the pointer lands, you’ll win the prize associated with the colour:

The game engine here is a classic 5 reel, 3 row. This offers 243 ways to win. To create a winning combination, you’ll need to land 3 or more matching symbols (or wilds) on adjoining reels, starting from reel 1. Stakes start at 20p per spin, rising to a maximum of £50 per spin.

As far as variance goes, we’re in the high range. This is a volatile slot. The maximum win (excluding the progressive jackpots) stands at an impressive 2,343 x your total bet per free spin.

The RTP of Absolootly Mad: Mega Moolah is 92.02%. That’s better than the original Mega Moolah slot which has an RTP of around 90% but still very low compared to most slots. It doesn’t compare very favourably with other jackpot slots either. Hall of Gods and Mega Fortune for example, have RTP rates of 95.5% and 96.6% respectively.

You can set up autoplay if you wish, as well as spin in turbo mode. Click on the lightning bolt to play at super speed. You can play Absolootly Mad on your tablet or mobile device. The imagery isn’t the sharpest but the brightly coloured symbols are easy to identify, even accounting for the rolling reels. It’s perfectly playable on the small screen.

The visuals in Absolootly Mad: Mega Moolah take inspiration from Lewis Carroll’s ‘Alice in Wonderland’ books. Playing cards and mushroom-filled gardens form the backdrop to the action in the base game and the free spins round.

On the reels you’ll see playing card suit symbols as well as pocket watches, teacups, butterflies, the Cheshire cat, the March hare and a magical wooden door. The most lucrative standard symbol is the Mad Hatter.

There’s an almost psychedelic feel to the imagery which is very nicely done and certainly in keeping with the rather surreal source material.

Click on the three lines top open up the settings bar where you can access the paytable, amend stakes and autoplay settings and music and sound effects. It’s all simple enough to do.

This addition to the Mega Moolah franchise is quite surreal. It can deliver some deadly serious jackpots though. The design and features are fine with the rolling reels and expanding multipliers delivering plenty of base game action.

Things improve still further in the Free Spins feature where the even bigger multipliers (up to 15x) are active. The skinny 92.02% RTP is pretty underwhelming, though.

If you’ve enjoyed the other slots in the series and enjoy volatile, progressive jackpot action, you’ll get just that in Absolootly Mad: Mega Moolah. The appeal of the £1 million+ Mega Jackpot is too hard to resist having a few spins.

❓ What is the Absolootly Mad: Mega Moolah RTP?

The RTP of 92.02% is definitely on the skinny side. It’s better than the original Mega Moolah but doesn’t compare favourably to the likes of Hall of Gods and Mega Fortune for example.

🥇 What are the Absolootly Mad: Mega Moolah progressive jackpots?

There are 4 progressive jackpot prizes in Absolootly Mad. The biggest of the quartet is seeded at £1 million but can get much, much higher and deliver 8 figure jackpots.

🎰 What features does Absolootly Mad: Mega Moolah have?

You’ll find rolling reels with expanding multipliers, free spins with multipliers of 15x and of course, the potential riches from the progressive jackpots.

⚡ What is the Absolootly Mad: Mega Moolah theme?