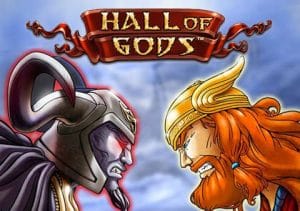 WHERE TO PLAY Hall of Gods SLOT

Hall of Gods is a Net Entertainment progressive jackpot video slot with 5 reels and 20 paylines. Like many other popular games, it’s based on Norse mythology (such as Thunderstruck II). It features the Gods such as Odin and Thor amongst others. The betting range is from 20p a spin to £50 a spin will all paylines enabled. Hall of Gods is an appealing game in that has 3 features and 3 jackpots.

The Hall of Gods jackpot slot was released way back in 2010 – as a result, it does look a little dated graphically. However, it adds to the appeal in my opinion. With a Norse mythology theme, symbols include chests full of apes, axes, necklaces, hammers and rings.

The 5 high value symbols are represented by Norse gods – you have Idun, Loki, Freya, Thor and Odin. The latter, Odin, is the most lucrative symbol with 2, 3, 4 or 5 in combination giving you 0.5, 2.5, 7.5 or 200 times your bet. You form winning combinations by getting matching symbols from left to right starting from reel 1.

Furthermore, all number of free spins have a 3x multiplier attached meaning that win amounts are trebled. Fancy extra free spins? Get 3 or more Odin’s Raven symbols and you will earn more. On each free spin, you can win up to 4,314 times your bet (with the trebling multiplier).

Finally, there is the Pick Win feature is where you can win the huge progressive jackpot. The bonus round is triggered by getting 3 Thor’s Hammer symbols anywhere on the reels. Thor’s Hammer is then used to break the shields on the screen – if you match 3 amounts, you will win that cash amount. On offer, there are 3 jackpots you can win.

The Mega Jackpot is the top one and is guaranteed to make you a millionaire. The biggest ever Hall of Gods jackpot was a whopping £7.8 million! If you want more life-changing progressive jackpots, NetEnt’s Mega Fortune is the jackpot slot to play.