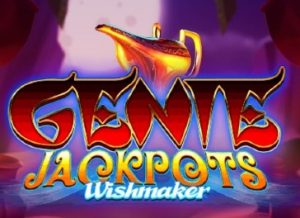 If you like slots that offer plenty variety when it comes to features, then look no further than the Genie Jackpots Wishmaker slot. Created by Blueprint Gaming, it comes with 7 magic modifiers that can strike at random in the base game and deliver wild extras, colossal reels, streak respins, mystery symbols, extra bonus symbols or a win spin. As you’ll discover in our in-depth Genie Jackpots Wishmaker review, this 5 reel, 20 payline game also comes with 6 triggered bonus features. Spin the wheel to see what you’ve won. Did this Arabian adventure live up to its name and grant our jackpot wishes? Let’s say ‘open sesame’ and have a closer look.

Slick visuals are a staple for Blueprint Gaming slots and the Genie Jackpots Wishmaker slot is another treat for the senses. With an Arabian/genie theme, the bright, cartoon imagery is colourful and bold and the animations are super smooth.

Blueprint Gaming puts as much emphasis onto sound as much as visuals and that’s the case here. The soundtrack fits the Genie theme superbly and creates plenty of atmosphere.

You’ll find an assortment of lower value playing card symbols on the reels alongside a magical book, sacks of gemstones, Arabian swords and a gem-encrusted turban. The best standard symbols is the logo which awards 25 x your bet if you land 5 on a payline.

You can play Genie Jackpots Wishmaker on all devices including PC, tablet and mobile. The sound and visuals stand up perfectly well on the smaller screen devices.  This is another cracking looking slot from Blueprint Gaming.

The Genie Jackpots Wishmaker slot comes with 5 reels, 3 rows and 25 paylines. Landing 3 or more matching symbols on successive reels, beginning from reel 1, will result in a winning combination.

Bet levels in Genie Jackpots Wishmaker range from between 10p and £500 per spin. You can set up to 100 autospins if needed, complete with stop limits for wins and losses.

The Genie Jackpots Wishmaker RTP is 96.06% which is average for a video slot. The volatility is in the medium range meaning balanced payouts throughout the base game and 13 bonus features. The max win is 10,000 x your total bet surprisingly.

Fans of a feature-filled slots certainly won’t feel short-changed from the variety of goodies available in Genie Jackpots Wishmaker. The 7 modifiers certainly liven up the base game action while the 6 triggered bonus rounds can deliver some knockout action.

In the bottom right-hand corner of the screen is a magic lamp. On any base game spin, the Genie can appear from the lamp. You’ll then get to pick from a selection of lamps which then awards one of the following extras.

Furthermore, on any spin, the Genie can also randomly turn a losing position into a winning one.

The Genie’s Wishmaker bonus features are activated by landing 3 or more bonus symbols on the same spin. Spin the wheel to see which of the following features you’ll go on to play.

Genie Jackpots Wishmaker Thoughts/Opinion – great if you like bonus features

We like slots with some variety but is 13 bonus feature a case of too much of a good thing? Perhaps.  For some players, the huge range of extras might be a little overwhelming. We liked having so many different extras to land though. You shouldn’t be getting bored playing this.

As usual for a Blueprint Gaming slot, the sound and visuals are terrific. Fans of their other slots that are packed full of extras like Ted and The Goonies should enjoy the very playable Genie Jackpots Wishmaker slot. If you’re after more hard-hitting action, games like Dragonfall (by Blueprint Gaming) are much better.

What is the Genie Jackpots Wishmaker max win?

The most you can win from a single spin in the Genie Jackpots Wishmaker slot is 10,000 x your total bet. The chances of winning this come down to the multipliers in the 2 free spins features.

What features does Genie Jackpots Wishmaker have?

Name a feature and Genie Jackpots Wishmaker probably has it. There are 7 base game modifiers and 6 bonus features which deliver a combination of free spins, pick me rounds, colossal symbols, streak respins and much else besides. Find out more in the Bonus features section.

This isn’t the highest variance slot you’ll play. The Genie Jackpots Wishmaker volatility is in the medium range. The RTP is in the middle of the pack too at 96.06%.

Can you play Genie Jackpots Wishmaker on a mobile or tablet?

Yes, you can play this feature-filled Arabian adventure on all devices including tablet and mobile. The Genie Jackpots Wishmaker mobile slot works perfectly well on iOS and Android-powered devices.