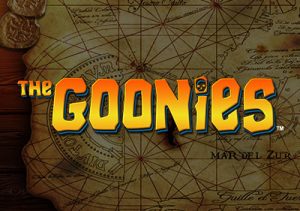 WHERE TO PLAY The Goonies SLOT

Try and unearth the fortune of One-Eyed Willy in The Goonies, a 5 reel, 20 payline video slot that’s based on the ever popular 1985 film comedy. Created by Blueprint Gaming, it’s packed full of extras including 6 modifier boosts as well as 6 bonus features that award free spins, pick me prizes and spin the wheel bonuses. Play this colourful game on your PC, tablet or mobile from between 20p and £500 per spin.

Like other branded video slots from Blueprint Gaming, the design here is classily done. The reels are set against a treasure map backdrop and include lower value royal values as well as weighing scales, skeletons, pirate ships and treasure chests full of gold. The super stacked skull and cross bones flag is the most lucrative, paying 50 times your bet if you land 5 on a payline. There’s also a wild that replaces all other symbols bar the Bonus. It too delivers awards up to 50 times your stake.
The game comes with 6 modifiers that can strike at random on any spin:

A scythe can sweep across the reels on a losing spin too and turn that loser into a winning combination. A cave collapse can also transform a loser into a winner. Land 3 or more Bonus symbols on the same spin and you’ll get a spin of the bonus wheel. Depending on where the pointer lands, you’ll receive 1 of the following extras:

If you’re a bit underwhelmed by which feature you’ve been awarded, you can gamble and try and land a potentially more lucrative one.

Blueprint Gaming has kept to its tried and tested formula in The Goonies. The high spec sound and visuals are impressively done and just what we’ve come to expect from the developer’s branded content.

The same goes for the range of extras. We can’t think of many video slots which offer quite as much variety on the features front as The Goonies does. If you like a good selection of bonus features, you’ll find plenty here. The variance is in the medium range.

The Goonies has legions of fans around the globe. If you’re one of them, you should find plenty to like in this faithful adaptation. Even if the charms of Sloth Fratelli and chums have passed you by, the range of extras on offer make The Goonies worth a spin. I also recommend you try some of their other branded titles with Ted worth playing.