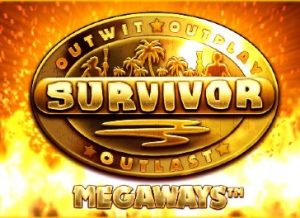 WHERE TO PLAY Survivor Megaways SLOT

Based on the popular US reality TV show (but which never really took off in Britain), the Survivor Megaways slot offers a 6 reel engine offering up to 100,842 Megaways. You can expect many of the usual Megaways goodies here including reaction wins, wild multipliers that can combine as well as a Free Spins feature that awards at least 15 free spins with expanding wild multipliers. Find out more in our extensive Survivor Megaways review.

Most of the elements that have made Big Time Gaming’s game shape-shifting game mechanic so popular are present and correct in Survivor Megaways. That includes reaction win reels, wild multipliers and free spins but rather surprisingly, no mystery transforming symbols. There have been a few tweaks to the game engine too. Let’s have a dig around at the Survivor Megaways bonus features.

Each time a winning combination is formed, a reaction follows. The winning symbols are removed and new ones replace them. The reactions continue until no new winner is formed.

The 2 character symbols, one male from the blue tribe, one female from the red, are the game’s wilds. These substitute for all the standard symbols in winning combinations.

Wilds start at a standard 1x. Landing urn symbols increases these multipliers by 1x, 2x or 3x. The size of the increase depends on whether the urns are 1, 2 or 3 symbols high.

Land more than 1 wild multiplier and their values are combined. For example, 2x and 3x multipliers provide a 6x boost. In the base game, the multipliers reset to 1x following a winless reaction. That’s not the case in the free spins round though. The Survivor logo is the game’s scatter symbol. Land 3 of these anywhere on the reels on the same spin and you’ll trigger the Free Spins feature. On offer here are 15 free spins with 5 more added for each extras scatter on the triggering spin. For example, triggering with 5 scatters will give you 25 free spins.

If you have a wild multiplier live on the triggering spin, it’s carried over to the free spins. The wild multipliers do not reset following a winless reaction. They remain the same or rise whenever an urn symbol lands. There’s no limit to how high the wild multipliers can go. Once again, they combine if more than one land on the same spin.

The Survivor Megaways slot comes with 6 reels. On each spin, the number of symbols that appear on each reel change. So too does the number of ways to create a winning combination. Reel 1 can have up 6 symbols whilst the other 5 reels can contain up to 7 symbols each. At maximum size, the reels combine to offer 100,842 Megaways:

Megaways slots usually have a single horizontal reel at the top of the main set. That’s where the wilds can land. Instead, the horizontal reels sits in the middle of the standard reels.

You can play from between 20p and £50 per spin. Click on he linked arrows button to activate autoplay. You can set between 5 and 100 auto spins. You can also set loss and single win limits here.

The RTP in Survivor Megaways is 96.47%. That puts it in the middle of the pack when it comes to the return to player rates for Megaways slots. It’s not as good as White Rabbits Megaways (97.39%) but better than Rainbow Riches Megaways (96%).

I found the variance in Survivor Megaways to be in the medium to high range. With most bigger wins coming from the wild multipliers, the max payout is 39,960 x your bet per spin or free spin. The slot is the official game for the US Survivor reality television series. Palm trees tropical flora and blue seas form the backdrop to the reels in Survivor Megaways. The reels are set within a shack-style building. There’s a primitive, drum heavy backing track playing on each spin which gives the game plenty of atmosphere. As does the sound of smashing pottery whenever an urn symbol lands.

On the reels you’ll find BTG’s standard A to 10 royals plus 4 more rewarding totem facemask symbols. The most rewarding symbol is the mask decorated in purple gems which awards 50 x your bet if you land 6 on adjoining reels on the same spin. You can check the current size of the wild multipliers in the meters to the left of the reels.

The Big Time Gaming game interface is rather minimal. You can set stake levels and autoplay without leaving the game page. Click on the 3 lines for the paytable, sounds, history and help sections.

With all the moving parts, the transition of a Megaways slot from desktop to mobile isn’t always totally smooth. This imagery in Survivor Megaways works pretty well on a handheld device though.

Like most of the British viewing public, I was rather underwhelmed with this US TV megahit. The Survivor Megaways slot is actually rather good though. Big Time Gaming has taken the classic Megaways mechanic and given it a tweak here and there to create a very playable slot.

The RTP is decent enough (96.47%) and the volatility is high enough to keep the potential for big win but not as punishing as it might have been. It does offer 39,960 x bet payouts on each spin though which is high – this is achieved by getting high wild multipliers.

‘Outwit. Outlast. Outplay’ is the motto of the television version of Survivor. Manage that with the slot version and you’ll be doing very well. You should also try Royal Mint Megaways (by BTG) which has different features and extras but is just as enjoyable.

❓ What is the maximum number of Megaways in Survivor Megaways?

If all the reels expand to their maximum size, you’ll have 100,842 ways to create a winning combination. It’s the first Megaways slot with this reel configuration.

🥇 What is the Survivor Megaways RTP?

The return to player for Survivor Megaways is a very reasonable 96.47%. On average, for every £100 you put in, you’ll get £96.47 back. The majority of wins will come from the Reactions feature with the bigger wins coming from the Wild Multipliers feature.

🎰 What is the Survivor Megaways max win?

The most you can win from a single spin or free spin in Survivor Megaways is 39,960 x your total bet. For this, you will need big combined multipliers in the Wild Multipliers feature.

⚡ Is there a Survivor Megaways free play version?

Yes, you can play the Survivor Megaways slot for free here at CasinoManual.co.uk. The demo version is available on desktop, mobile and tablet devices.