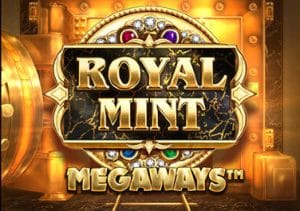 Another arrival to the Megaways slots series is Royal Mint Megaways, a 6 reel game from Big Time Gaming where the number of ways to win can reach 117,649. As usual, you can expect reaction wins as well as free spins with an expanding multiplier. Play on your computer, tablet or mobile from 10p to £20 per spin. The RTP is a high 96.68%.

A bank, flanked by marble columns and blossom trees form the backdrop to the action in Royal Mint Megaways. Big Time Gaming has kept things simple on the reels which are made up of the usual assortment of A to 9 royals and brightly coloured jewels. To create a winner, you need to land matching symbols on adjacent reels, starting from reel 1. The best standard symbol awards 50 x bet if you land 6 on adjoining reels. Look out too for the wild that substitutes for all standard symbols.

Reaction wins are a staple feature of Megaways slots and they’re in play in Royal Mint too. After a winning combination is formed, a reaction follows. Those winning symbols are removed and new ones drop into replace them. A new payout consideration is made. The reactions continue until no new winner is created.

The gold bar is the scatter. Land 4 or more of them on the same spin (and spell the word MINT) and you’ll activate the Free Spins feature. On offer are 12 free spins (plus 4 extra free spins for each scatter above 4 on the triggering spin). The Reaction wins are in play during the feature. Each reaction boosts a multiplier by 1x during the free spins. Land 3 scatters during this round and 4 extra free spins are added to your total – with no limits.

Each time you land 3 scatters on the same spin you’ll add a gold bar to a meter. Once you have 40 of these, you’ll see an extra scatter added to the reels on each spin. When you then land 4 or more scatters on the same spin, you’ll activate the Heartstopper Enhanced Free Spins feature. 12 free spins are awarded, this time with a starting multiplier of 2x which increases by another 2x with each reaction win. It’s the same as the Free Spins feature but the multiplier jumps as 2 as opposed to 1 with every win/reaction.

Big Time Gaming has stuck to its tried and tested Megaways formula in Royal Mint (Megaways). It doesn’t boast the flashiest design you’ll see but the classic Megaways gameplay is present and correct which is what we’re most interested in. The enhanced free spins offer the best chances courtesy of the expanding multipliers with increase by 2 each time.

Get on a roll there and coins can quickly build. The top payout is 41,300 x your bet on every free spin. There’s nothing massively original here but if you like the shape-shifting mechanic, then Royal Mint Megaways is well worth a spin.

If you want more Megaways action, Bonanza Megaways was the game that put the mechanic on the map – alternatively, Megaways Monopoly incorporates elements of the board game into the gameplay.