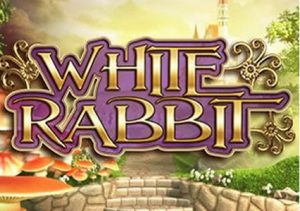 WHERE TO PLAY White Rabbit SLOT

White Rabbit is a psychedelic video slot version of Lewis Carroll’s classic story Alice In Wonderland. Created by Big Time Gaming, it uses the shape-shifting MegaWays game engine and comes with wild multipliers and a bonus round where you’ll receive up to 75 free spins on a machine that can offer up to 248,832 ways to win. Play this medium to high variance game on your PC, tablet or mobile from between 10p and £20 per spin.

The original Alice story was pretty surreal but Big Time Gaming has turned that right up to 10 with the design of White Rabbit. The reels feature some of Lewis Carroll’s most famous characters including the Mad Hatter, the Dodo, Tweedledum and Tweedledee and the Cheshire Cat. The top payer is the Red Queen who awards 2, 5, 10 or 25 times your bet if you land 2, 3, 4 or 5 in combination. The wild can appear on reels 2, 3, 4 and 5 only.

The number of symbols on a reel changes with each spin. The number of MegaWays alters too. If they all reach their maximum of 7 symbols high in the base game, you’ll be playing with 16,807 ways to win. Big Time Gaming has put some very solid extras into White Rabbit.

Caterpillar Wilds feature – you’ll notice a sleeping caterpillar to the left of the screen. This creature can wake up from its snooze on any spin and then add up to four 2x or 3x multiplier wilds to the reels. Land more than 1 multiplier wild on the same spin and the values are combined to give your payout and even bigger boost.

Free Games feature – land 3 scatters on the same spin and you can look forward to 15 free spins. The action here takes place on special reels that can expand and boost the number of potential MegaWays in play. Look out for the cupcakes symbol which is replaced by 2 standard symbols when it hits as well as lengthening the reels.

Retriggers, and an extra 15 free spins are awarded if you manage to expand the reel to its full size of 12 symbols. In theory you could end up with 75 free spins. The extended reels mean that the number of MegaWays in the bonus game can reach an enormous 248,832.

You’ll also be given the opportunity to buy the feature. The exact cost is shown in the meter in the top right-hand corner of the screen. Hope to see gold coins which can bring the price of buying the feature down.

This isn’t the first Alice-themed video slot we’ve seen. It’s the most outlandish though. The MegaWays game engine delivers plenty of action and the expanded free spin reels offer some decent opportunities. As do the multiplier wilds. As far as volatility goes, we’re in the medium to high range with top wins of 13,000 times your bet on every spin.

This fairy tale yarn is slightly bonkers. It’s enjoyable enough though and one to consider if you like MegaWays games – I would also try other Big Time Gaming titles as they are innovative and unique with The Final Countdown recommended.