The countdown to Russia 2018 is almost over and if you’re looking for a video slot to inspire a bit of World Cup fever then look no further than Top Trumps Football Stars: Sporting Legends which has just launched at Coral Casino.

Based on the hugely popular card game, it’s a 5 reel, 20 payline video slot from Playtech that comes with fully customisable symbols and some back of the net bonus features. With the packed stands of a football ground in the background, you’ll see images of some of the world’s top footballing talent spinning around the reels. You can pick and choose from 30 players including Messi, Ronaldo, Neymar and the like. Whoever you pick as your top paying symbol will get you 25 times your bet if you land 5 on a payline.

Playtech has packed in a decent range of features here, starting with the Free Kick Respin feature – sometimes you’ll see a football bounce onto the reels. If it then goes on to hit the back of the net above the reels, you’ll be awarded a respin with the symbol the ball originally landed on turning into a sticky wild. The respins keep on coming as long as the ball keeps hitting the net.

A similar process is on offer in the Wild Free Games feature. It’s triggered by landing scatters on the middle 3 reels. Balls land on the reels to create sticky wilds and add free spins to your total.

Rounding out the extras is the Football Trophy Bonus feature – this is a variation on the pick me round. You’ll be offered the pick of 21 cards. Behind each 1 is a footballer complete with cash prizes, multipliers and pick agains. You’ll start with 3 picks but there are ample opportunities to add more to your tally.

Just like the classic card game on which it’s based, Top Trumps Football Stars: Sporting Legends is a relatively simple game. It all works pretty well though with all 3 features offering some decent winning potential. It also comes with 3 progressive jackpots – 1 is won daily and 1 is won weekly. The Sporting Legends jackpot is the biggest though with payouts of over £234,000.

If you can’t wait for the World Cup action to begin then Top Trumps Football Stars: Sporting Legends is an entertaining little appetiser. Take it for a spin today at Coral Casino – new players who sign up and deposit £10 will be eligible for a £50 bonus.

Get in on the action at Coral Casino
18+, New Customers Only. T&Cs apply. www.begambleaware.org. 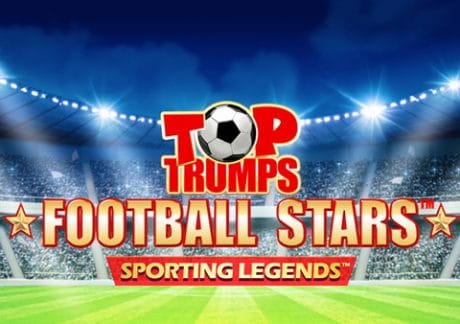