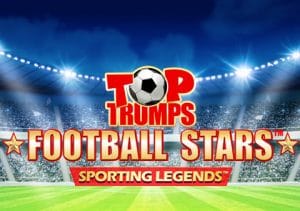 Go for goal in Top Trumps Football Stars: Sporting Legends, a 5 reel, 20 payline video slot from Playtech. This take on the beautiful game features many of the best players in the world and comes with respins and free spins with sticky wilds as well as a picks round. Play on your desktop, tablet or mobile from between 20p and £20 per spin.

A football pitch and packed stands form the backdrop to the action here. The lower value symbols are joined by 5 footballers. You can pick and choose who you want here. There are 30 players to choose from including Messi, Ronaldo, Neymar, Suarez and Rooney. Whoever you choose as your top payer will get you 25 times your bet if you land 5 across a line.

There’s also a wild, the football, which replaces everything bar the scatter and bonus symbols. It too offers awards of up to 25 times your bet per payline. Playtech has packed in some very decent features into Top Trumps Football Stars: Sporting Legends:

Free Kick Respin feature – on any spin, you could see an animated football bounce onto the reels. If it lands on a player, it will turn that symbol into a sticky wild and a respin is awarded. These continue as long as a new football arrives and then bounces into the net above the reels.

Wild Free Games feature – land the Top Trumps logo on the middle 3 reels on the same spin to trigger this round. Again, a football bounces onto the reels. If it lands on a player and then hits the back of the net, the player turns into a sticky wild. The number of free spins awarded varies here as they keep on coming as long as the ball hits the net.

Football Trophy Bonus feature – the Bonus symbol on reels 1 and 5 on the same spin opens up this pick me round. You’ll be given a selection of 21 cards. Behind each one is a player who can also award a cash prize, a multiplier and/or more picks. You’ll begin with 3 selections but you can expect to add to that initial allocation. The best pick is the Win All card which awards everything.

Football Stars also offers the chance to win a daily, weekly or Sporting Legends progressive jackpot prize – these are won randomly on any spin. Playtech has created a rather enjoyable game here. The design is simple but neat and crisp and there’s a very decent selection of extras on offer. We landed them all at regular intervals too.

The football themed video slot is a very tricky one to do well. Playtech has done a pretty good job with Top Trumps Football Stars: Sporting Legends in my opinion.