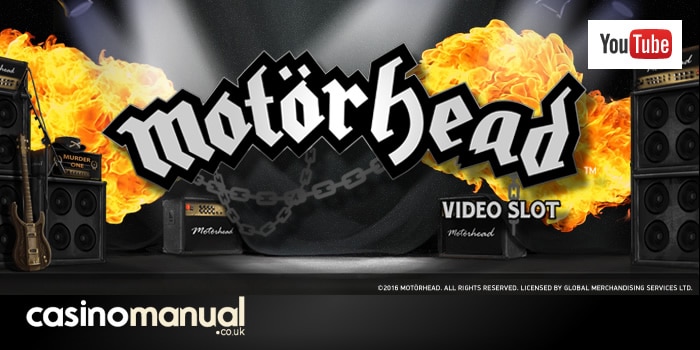 The 3rd video slot from the Rock Series by Net Entertainment will be released on the 22nd of September – watch the official Motörhead video preview below.

The official Motörhead video slot is hugely anticipated following the popularity of NetEnt’s Guns N’ Roses and Jimi Hendrix games earlier this year. On the 22nd of September, the 3rd rock themed title will be launched which will have 5 reels and 76 paylines.

You can rock out with Lemmy and the crew on all compatible devices from only 20p a spin. It will have an unusual 3x3x4x4x5 layout with 3 bonus features in total. There will be a Mystery Reel feature where 1 or more reels are designated the mystery reel on each spin. They change the symbols on that chosen reel(s) into the same symbol (randomly) increasing your chances of forming winning combos.

It will also have a Bomber feature where bombs land on the reels and added up to 10 mystery symbols – they then change into the same randomly chosen symbol. This time, you can get a wild which increases your winning potential further.

The encore will be the Free Spins feature where you will get 10 free spins – the Mystery Reels feature applies here but wilds can appear as the chosen symbol for big wins up to 570 times your bet on each free spin! Prior to its release, watch the Motörhead game in action below:

Despite summer here, Net Entertainment isn’t taking it easy with 2 releases last month – on the 24th of August they will release Secrets of Atlantis which looks superb. You can also play some exclusively-produced titles by NetEnt at Mr Smith Casino – Joker Pro and Wild Wild West: The Great Train Heist are now live.

Mr Smith Casino is one of our favourite online casinos as they have an abundance of games from IGT, Microgaming, WMS Gaming, Yggdrasil Gaming, Play ‘N Go and NextGen Gaming amongst others. They also offer you, as a CasinoManual.co.uk reader, an exclusive 200% welcome bonus up to £200 plus 50 Starburst free spins – deposit only £100 to get £200 free and 50 Starburst free spins.