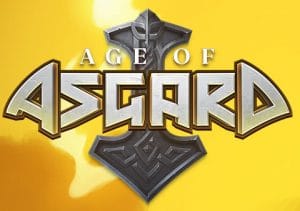 WHERE TO PLAY Age of Asgard SLOT

One of the more popular themes of recent times has been the Norse saga and they don’t come much more epic than Age of Asgard. Created by Yggdrasil Gaming, the base game action takes place on 2 distinct 5 reel, 20 payline machines. Look out for stacked high value symbols and wilds. These special wilds can nudge and fill whole reels and award a respin. There are also 2 free spins bonuses which play out on a single 50 payline machine and come with even more extras. Stakes range from between 20p and £200 per spin.

You won’t see many better-looking video slots than Age of Asgard. The action takes place on 2 different sets of reels. The top reels have a ‘good’ theme, the lower set a ‘bad’ theme. Both feature rune stones and 3 higher value character symbols. The latter all spin in a 3×1 stacked formation.

Single wilds are joined by special character wilds. These spin in stacked formation. Land part of a character wild and it expands to fill the whole of the reel. If a character wild lands fully expanded, it locks in position and a respin follows in the Respin feature. The process is repeated if another wild appears on the respin. If you manage to turn the whole of the reels wild in the base game, you’ll pocket 960 times your bet. In the free spins features, that increases to 1,200 times your bet.

In the happy event of landing 2 fully extended wilds on top of each other across the 2 reel sets, then you’ll activate the Clash feature. Up to 4 single wilds are thrown onto the reels at random. If they land on a high value character symbol, they expand and turn the whole of that reel wild.

There are 2 different free spin rounds in Age of Asgard. The standard Free Spins feature ise triggered by landing 3 bonus symbols on the same spin. Your reward is 10 free spins on a single 5 reel, 6 row, 50 payline machine. Wilds here can spin in 6-high formation. They also nudge to fill whole reels when they hit. The Clash bonus can trigger here. Respins are on offer too.

Potentially even more rewarding is the Ragnarok Free Spins feature which is triggered by landing 3 Bonus symbols on both sets of reels on the same spin. These take place on a single 50 payline machine that’s made up of high value symbols only. Super Wilds always nudge to fill their reel in this round. They also award the Clash and a single respin.

If you hit 5 Bonus symbols across the 2 sets of reels, you’ll get a spin of the Randomizer Wheel. Depending on where the pointer lands, this can upgrade the standard Free Spins feature up to the Ragnarok Free Spins feature. It could also award an instant win of 50 times your bet.

Age of Asgard is a hugely impressive take on the Norse myth and legend theme. The visuals are as good as you’ll find anywhere, complemented by sweeping orchestral backing track. Yggdrasil Gaming has managed to deliver plenty of innovation and variety into the gameplay too, especially in the Ragnarok Free Spins feature which can be a cracker.

Fans of the Norse theme will find plenty to like in the saga that is Age of Asgard – especially as you can win up to 2,444 times your total bet. If you want Norse mythology video slots, Microgaming’s Thunderstruck II is still the standard.