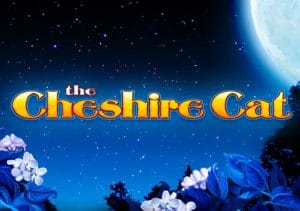 WHERE TO PLAY The Cheshire Cat SLOT

Loosely based on Lewis Carroll’s 19th century classic, Alice’s Adventures in Wonderland, The Cheshire Cat is a 5 reel, 40 payline video slot from WMS Gaming. Look out for extra symbols which magically appear on each spin and a free spins round that can be played on up to 4 independently spinning machines, all of which feature frozen stacked wilds. Stakes start at 40p per spin.

Lewis Carroll’s original story was certainly a little strange and that’s true of the design in this slots version – by strange we don’t mean bad though. A forest forms the backdrop the reels. There you’ll see the usual assortment of lower value playing cards plus slices of cake, beakers of magic potion, the March hare and Alice.

The top payer of the standard symbols is the Cheshire Cat himself. Land 5 of these on a payline for a 500-coin payout. 50 coins, is that all? we hear you say. On each spin, 1 symbol is chosen at random. Extra instances of this symbol are added to all 5 reels on that spin so expect to see plenty of stacks of matching symbols.

Also helping you to create winning lines if the Cheshire Cat logo which is the wild – it replaces all other symbols bar the bonus and offers awards of 10, 50 or 500 coins if you land 3, 4 or 5 on a payline.

The Free Spins Bonus feature in The Cheshire Cat is a little unusual – it’s triggered in the usual manner by landing 3 or more bonus symbols on the same spin. You’ll receive 5, 10 or 20 free spins plus a payout equal to 10 or 50 times your stake if you landed 4 or 5 bonuses.

Things then get slightly surreal as a giant wheel drops down onto the reels – this spins to determine how many how many reel sets are independently spinning during the feature. This can be anything up to 4 different machines. A second outer wheel will spin to reveal what sticky wilds are play during your free spins. These sticky stacked wilds will be applied to all the reel sets operating.

The feature round in The Cheshire Cat is certainly a little unusual. It’s sound more complex that it really is. In short, you can land up to 20 free spins, played out on 4 different machines with each of them featuring stacked sticky wilds.

The cartoon design is pretty simple but works well enough, accompanied by a lush orchestral backing track. We enjoyed The Cheshire Cat though – its blend of simple visuals and a nice feature make for an enticing combination. Get lucky with those extras and you could end up feeling like the cat that got the cream. If you like the theme, Ash Gaming’s Adventures Beyond Wonderland is highly recommended.