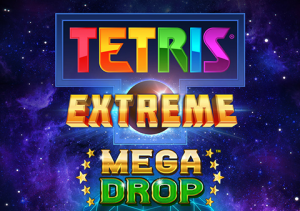 WHERE TO PLAY Tetris Extreme SLOT

If you’re a fan of the all-time great video game as well as online slots, then you should like the Tetris Extreme slot which combines elements of both to entertaining effect. Created by Red 7 and WMS Gaming, it’s played using a 7 reel, 10 row, cluster pays game engine. Clear rows to bring multipliers of up to 50x into play. Trigger the feature for free spins where gold Tetrominos can boost the standard multipliers by another 5x – so up to 250x. Get playing from between 20p and £100 per spin.

The design in the Tetris Extreme slot will have a very recognisable look to it if you’ve played any version of Tetris before. The 7 reels are made up of 7 different coloured squares. These can appear in blocks of 4 which can rotate by 90, 180 or 270 degrees to fill a symbol gap.

The action in Tetris Extreme takes place on a cluster pays machine. To create a winner, you’ll need to land a cluster of at least 9 matching symbols. These clusters can contain vertically and horizontally attached symbols. You can create winning combinations with more than 1 symbol on the same spin too.

Line Clear Multiplier of up to 50x

Hope to fill a whole row with symbols as this will clear the line. Those symbols are removed and a symbol drop follows. These keep on coming as long as a new winner is created. Opening up a row also brings the Line Clear Multiplier feature into play. These start at 2x when you clear a single row but can rise to 50x if you manage to fill 15 or more rows during a single game. A new game takes the multiplier back to its starting position of 1x.

Rather than by landing scatters, the Free Spins feature is triggered by clearing 15 rows in a single game. You’ll then go on to play 10 free spins. Joining the action here is a gold Tetromino. If this forms part of a combination that clears a row, it boosts the already awarded multiplier by another 5x.

This can really get things moving as you could benefit from a 250x multiplier! You can only land 1 gold tetromino in a single free spin though. Finally, you can win unlimited extra free spins by get 15 or more Line Clears.

Tetris Extreme also offers the chance to land 1 of 3 progressive jackpot prizes as its part of the Mega Drop Network. The best of the 3 potential awards is the Epic Jackpot where payouts range from between £20,000 and £200,000.

It doesn’t offer much in the way of variety, but you won’t find many more hypnotic slots than Tetris Extreme. The gameplay can be a little repetitive but clearing reels can deliver plenty of excitement thanks to the multipliers they bring into play. The potential 250x multiplier can result in 50,000 times bet payouts but the maximum win stops at £250,000.

Even if the video game version of Tetris passed you by, the Tetris Extreme slot adaptation is a game to consider if you’re looking for something that’s a little bit different from a classic fruit machine.