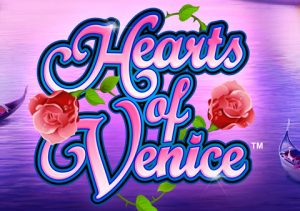 WHERE TO PLAY Hearts of Venice SLOT

Take a trip to the world’s most famous canals (no, we don’t mean Birmingham) in the Hearts of Venice slot, a 5 reel, 50 payline game from WMS. This particular gondola ride comes with mystery symbol transformations, respins with frozen wilds and a free spins bonus feature. Playable on desktop, mobile and tablet devices, stakes rage from between 40p and £500 per spin.

Considering that Venice is one of the world’s most iconic destinations, we hoped that the Hearts of Venice slot would be a visual dazzler – sadly, we were a little underwhelmed on that score. The imagery is a little blocky and though perfectly serviceable, lacks the wow factor found with slots from some other developers. Saying that, Hearts of Venice is a very popular slot found in land-based casinos so it does have a certain charm to it.

Symbols on show include red roses, Capricorns, mooring poles, gondolier hats, lion statues, lamps, bridges and gondolas. The top paying symbols are the stripy shirted gondolier and the woman with the rose – the latter pays 5 times your bet for 5 in combination. The Hearts of Venice logo is the wild, replacing everything bar the feature and reveal symbols – it appears on all reels bar reel 1.

The heart is the reveal symbol- when it hits fully stacked on reel 1, you’ll trigger the Hot Hot Respin Mode feature. The stacked hearts are held in place and you’ll be awarded 2 respins with any hearts that land also being held in position. After both of the respins are complete, all of the hearts will be transformed into the same random symbol, offering some great winning chances.

Hearts of Venice also comes with a Hearts of Venice Bonus feature which is triggered by landing 3 of the silhouetted couple scatter symbol. Here you’ll be awarded 10 free spins with extra wild and reveal symbols added to the reels, making it that much easier to trigger the Hot Hot Respin Mode feature.

Land 3 more scatter symbols on reels 1, 2 and 3 and you’ll re-trigger the feature and earn another 10 free spins. The free spins also come with a guaranteed payout of at least 40 times your total bet which is a nice touch.

Despite the slightly lackluster visuals, Hearts of Venice does still have its charms – fill the reels with a high value random symbol and the respins can deliver rich rewards. Saying that, a screen full of the woman with the rose will give you a 250 times bet payout.

The Hearts of Venice Bonus feature isn’t bad either but the low win potential doesn’t make the Hearts of Venice slot very appealing – it’s only recommended if you’ve played it in land-based casinos really. There are better WMS slots to be honest include the volatile Raging Rhino Megaways.