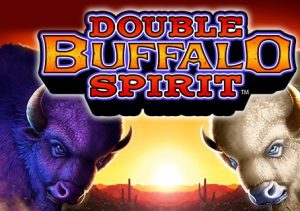 The desolate, mystical desert plains of the American west is the setting for Double Buffalo Spirit, a 5 reel, 1,024 ways to win slot from WMS Gaming. Can the magical spirits of the area help you conjure up a jackpot? The likeliest way to do some comes via the bonus feature that offers up to 40 free spins with wild multiplier that can double or even treble payouts. Play from between 40p and £100 per spin.

The first thing to note when firing up Double Buffalo Spirit is that it uses the 1,024 ways to win game engine – winning combinations are formed when matching symbols land on adjacent reels rather than traditional paylines. With 1,024 of them in operation, expect plenty of lower level wins.

Double Buffalo Spirit does come with a Free Spins feature which is triggered by landing the cow skull bonus symbol. Three, four or five of them scattered anywhere on the reels will get you 8, 15 or 20 free spins. There’s power to add to that total too – just 2 bonus symbols during the feature will land you another 5 free spins. Three, four or five once again deliver 8, 15 or 20 with a maximum of 40 available.

You can boost your free spins wins too courtesy of the wild multipliers which can land on the middle 3 reels – when they form part of a winning combo, look forward to a double or treble payout. Even better is if multiple wilds form part of the same winning combination as the multipliers will be combined. No matter what happens, you’re guaranteed to win at least 10 times your total stake whenever you trigger the Free Spins feature.

Visually, Double Buffalo Spirit is simple but very neat. The reels are set against a red sky backdrop and include playing cards, a gopher, an eagle and a lizard alongside purple and white buffalo. The buffalo pay out in their own right. They can also combine to form a winning combination. The action plays out to a relaxing country style soundtrack (which becomes a little more frantic once the free spins round kicks in).

The action flows along nicely thanks to the 1,024 ways to win game engine and the free spins come along at fairly regular intervals. The overall variance is in the medium range.

It may not quite offer the thrills of WMS stablemate Raging Rhino, but Double Buffalo Spirit is still a well-designed and very playable slot. If you’re looking to dip your toes into the often frenetic WMS waters, then Double Buffalo Spirit is a pretty good place to start. And if the animal spirits are in a benevolent mood, there’s plenty of potential for a decent win or two as well.