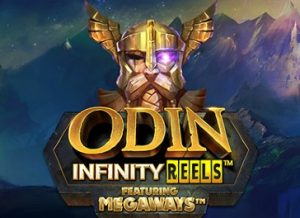 Join the leader of the Norse gods in his Asgard kingdom in the Odin Infinity Reels Megaways slot. This Scandi saga comes from ReelPlay and uses the developer’s Infinity Reels game mechanic in association with the Megaways game engine. The number of reels in play expands with each successive win. Consecutive winning spins also bring a multiplier into play. Land 12 straight wins for a jackpot of 888 x bet. There’s also a Free Spins feature that awards 8, 10 or 12 free spins where each winning spin sees the multiplier jump by 1, 2, 3 or 4x. With possible wins of 20,000 x bet on each spin, find out more in our detailed Odin Infinity Reels Megaways review.

The design in the Odin Infinity Reels Megaways is fantastic. With a Norse mythology theme, the setting is a magnificent mountain range.  The game is based on Odin who is the leader of the Æsir and King of Asgard.

One of the better looking games you’ll come across, the same goes for the stirring orchestral backing track. It really ramps up the atmosphere and fits the epic Norse theme perfectly.

On the reels you’ll find lower value rune stone symbols as well as a selection of more rewarding symbols that relate to the Norse theme. They include a trio of animals and Odin himself. The Valknut symbol is the wild and replaces all symbols bar the scatter.

The imagery is super stylised and original. You won’t see many better looking and sounding slots than this. All the praise we’ve given to the desktop version of this Scandi saga apply to the Odin Infinity Reels Megaways mobile slot. The design on the small screen version is terrific. Despite the expanding reels, the visuals stack up perfectly well on mobile. It’s a very playable game whichever device you opt for.

2 innovative game mechanics combine in the Odin Infinity Reels Megaways slot. Each new spin starts on a 3 reel machine. The number of symbols on each reel varies from 2 right up to 5 due to the Megaways part of the game engine. Land 3 matching symbols or wilds on adjoining reels and you’ll create a winning combination.

A new reel is then added to the right of the current set up. A multiplier also increases by 1x. If a new winning combination is formed, the process is repeated. More and more reels and more multipliers are added until no winner is created. The final payout is boosted by the multiplier. It’s possible to create winning combination made up of more than 1 symbol on the same spin.

The bet levels in Odin Infinity Reels Megaways start at 30p per spin, rising to a maximum of £90 per spin. Just click on the coins to adjust accordingly. From the settings, click on the arrows to select autoplay. You can run between 5 and 100 autospins. There are no win, loss or feature stop limits. You can set quickspin mode though.

The Odin Infinity Reels Megaways RTP is 96.18%. The most you can win from a single spin in either the base game or the feature is 20,000 x your total bet.

There’s plenty going on this blast of Norse legend. That doesn’t include the unusual game mechanic where the number of reels, the number of ways to win and a multiplier increase with each successful spin. There’s also a free spins round where each win can deliver a multiplier boost of up to 4x.

When a win is created, the Symbol Multiplier feature comes into play. The multiplier increases by 1 with each reel that is added. The multiplier value can increase infinitely, as can the reels and hence the ‘Infinity’ part.

If you manage to get on a real roll, you can land a bumper bonus prize. 12 successive wins delivers a jackpot worth 888 x your bet. This is in addition to any wins you collect along the way.

This first slot to combine Infinity Reels with the Megaways mechanic works extremely well. The gameplay is relatively simple once you’ve got used to the shape shifting reels. The multipliers mean that the coins can quickly fly.

That’s definitely the case in the Free Spins feature, especially if you manage to spin at 1 of the higher free spin levels where the multipliers can jump by 3 or 4 each time the reels expand. This is what will get you close to winning the 20,000 x bet max win per spin.

Add the terrific soundtrack and ornate visuals into the mix and the Odin Infinity Reels Megaways slot is a game that you won’t want to miss.

If you like the Infinity Reels engine, try Giza Infinity Reels which is a popular slot to use the innovative engine. If it’s Megaways you’re after, you cannot go wrong with Bonanza Megaways by Big Time Gaming.

What are Infinity Reels?

Land a winning combination and an extra reel is added to the right-hand side of the current machine. Each expansion also adds 1x to a multiplier. The reel expansions continue until no new winning combination is created. The added wrinkle here is the Megaways element where the number of symbols on each reel varies each time. Land 12 wins in a row for an 888 x bet jackpot.

What is the Odin Infinity Reels Megaways RTP + max win?

The Odin Infinity Reels Megaways return to player rate is 96.18%. The most you can win from a single set of spins in the base game and the bonus round is 20,000 x your bet.

Is there an Odin Infinity Reels Megaways free spins round?

Yes, land 5 golden sword scatter symbols to trigger the Free Spins feature. Spin the wheel for 8, 10 or 12 free spins. Spin another wheel for your level. The multiplier increases by 1, 2, 3 or 4x, every time a reel is added depending on the level.

Is there an Odin Infinity Reels Megaways mobile slot?

Yes, you can play Odin Infinity Reels Megaways on your mobile as well as on a desktop device. You’ll find the same superb sound and visuals as well as the potentially exciting gameplay on mobile and on desktop.