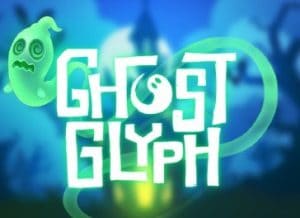 WHERE TO PLAY Ghost Glyph SLOT

Join a band of charming poltergeists in their haunted house in the Ghost Glyph slot. This Halloween-themed game has been created by Quickspin and is played on a 7×7 cluster pays grid with tumbling reels. Tumbles deliver Glyphs which can in turn activate Ghost Urns which bring with them an assortment of wild extras, transforming symbols, symbol upgrades or free spins. Look out too for massive wilds. The maximum win in this medium to high variance slot is 2,260 x your total bet. Find out more about this cartoon apparitions in our detailed Ghost Glyph review. The grounds of a haunted house form the backdrop to the action in the Ghost Glyph slot. With a horror theme, there’s a slightly blocky look to the visuals here which are typical Quickspin. It’s all very easy on the eye.

You’ll hear a cartoonish soundtrack playing while you spin. The theme might be ghosts and ghouls but this isn’t a creepy slot. The design is light-hearted and very nicely done.

The 7×7 grid is made up of small symbols that look like coins. They’re embellished with star, moon, skull and cobweb icons. Joining the 4 lower value symbols are 3 higher payers. There are green, red and blue crystal symbols. The blue crystal symbol the most lucrative. Land a minimum cluster of 5 symbols for an award of 1.5 x your total bet. Hit a bumper 15-symbl cluster and you’ll pocket an award of 600 x your bet.  There is also a gold wild which replaces all symbols bar the Ghost Glyph.

As usual for a Quickspin release, there’s a Ghost Glyph mobile slot as well as the standard desktop version. The design is as high spec on the smaller screen devices too. You’ll find the same blend of features in the mobile slot too. It works nicely.

The Ghost Glyph slot is played using a 7×7 grid. To create a winning combination, you need to land a cluster of at least 5 matching symbols. The bigger the cluster, the better the rewards.

Bet levels in Ghost Glyph start at 20p, rising to a maximum of £100 per spin. Just click on the Total Bet box below the reels to adjust. Autoplay is available if required. You can run between 10 and 1,000 autospins. Click on the advanced options to set win and stop loss limits. There’s a quickspin mode available if required too.

The Ghost Glyph RTP is 96.18% which is about average. The hit rate of 33% means that you can expect to land a winning combination on about a third of your spins on average.  The Ghost Glyph volatility is in the medium, nudging into the high range. We’d put the variance at around 4 out of 5. The max win is 2,260 x bet per spin.

The gameplay in Ghost Glyph is rather unusual. Central to the action are the tumbling reels which bring the Ghost Glyphs and their assortment of modifiers into play.

After you’ve created a winning cluster, the Tumbling Reels feature is activated and a tumble follows. The successful symbols are removed and new ones drop in and replace them. This can lead to continuous wins.

A Ghost Glyph is added to one of those newly emptied positions after a tumble. This counts as a wild for the next tumble. If a new winner is formed, a Ghost Urn is added. There are 4 different Ghost Urns, with each one awarding its own unique feature. One new Ghost Urn is added with each successive tumble. The order they are added is chosen at random. When there’s an unsuccessful tumble, the collected Ghost Urn extras are awarded in turn. Here’s what they award. The Blue Ghost Urn unlocks the Bonus Game feature. Each tumble during this feature increases the Paranormality Meter. Fill it by landing 8 tumbles and you’ll unlock the Massive Wilds feature.

The massive wilds will apply on your last free spin. There are different levels to these:

The massive wilds may apply only on your last free spin but landing a win will give you a tumble and therefore another free spin effectively. If you were to reach level 3 or higher, a large 3×3 colossal wild will move around the grid with each successive tumble until no more new wins are created.

Ghost Glyph is a rather unusual slot. The gameplay is far removed from a classic video slot so if you’re accustomed to playing them, make sure you have a session in play mode to get used to the extras.

There’s some decent gameplay here once you’ve got used to the setup and extras. The Ghost Glyph extras can deliver some solid action, especially if you get on a roll with the tumbles and bring multiple extras into play.

If you fancy trying some fresh this Halloween, the Ghost Glyphs offer just that. Other slots to play during Halloween include NetEnt’s Blood Suckers 2 which is much more terrifying.

What is the Ghost Glyph RTP?

The Ghost Glyph return to player rate is 96.18% which is about average. The hit frequency is just under 33% so you can expect to land a winner around a third of the time.

What is the Ghost Glyph max win?

The most you can win is 2,260 x your total bet on each spin. A trip to this haunted house is in the medium to high range variance wise. The bigger wins will come from the various bonus features on offer.

What are Cluster Pays?

In a cluster pays slot, winning combinations are formed by landing clusters of 5 or more matching symbols. A tumble then follows with new symbols dropping in to replace the original winners. In Ghost Glyph, this will bring the Ghost Urns into play, complete with added wilds, symbol upgrades and even free spins.

Is there a Ghost Glyph free spins feature?

Yes, landing a blue ghost urn will trigger the Bonus Game feature. Tumbles here fill the Paranormality Meter which brand massive wilds into play for your last free spin. These can reach 3×3 in size that roam around the reels with each tumble.