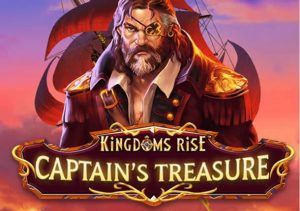 Another release in Playtech’s epic fantasy-themed series is Kingdoms Rise Captain’s Treasure. It’s a pirate-themed slot that’s played using a 6 reel, 50 payline game engine that comes with top drawer design and a potentially exciting respins feature where walking wilds can really get things moving. Stakes here range from between 10p and £1,000 per spin.

Like the other slots in the Kingdoms Rise series, the design in Kingdoms Rise: Captain’s Treasure is impressively done. With cloud-filled skies in the background, the reels include 4 gemstone symbols as well as an assortment of pirate paraphernalia. They include barrels, a ship’s anchor, a treasure map, a chest full of coins and a galleon.

Captain’s Treasure comes with 2 wild symbols. The gold skull and crossbows coin is the standard wild. This can appear anywhere on the reels and substitutes for all the standard symbols. This pays 1, 2, 4.25 or 20 times your bet (for 3, 4, 5 or 6).

The compass-style coin is the second wild. This also replaces the standard symbols and pays up to 50 x bet. It also triggers the game’s Captain’s Treasure Respins feature.  A respin is awarded with the compass wild moving to an adjacent vertical or horizontal position to create a trail of wilds.

The respins continue until compass wild reaches its initial position. A payout calculation is made following each respin. Land a lengthy trail of wilds here and the coins can quickly build. This feature can also be found in Playtech’s Anaconda Wild slot.

Collect tokens while spinning and you’ll then be able to head to the Kingdom’s Rise Shop and buy a bonus. With 500, 1,000 or 1,500 tokens you’ll be able to buy 1, 2 or 3 compass wilds for the Golden Wild Respins feature. If you choose the 1,500 token option, 3 compass wilds will create trails which can lead a screen full of wild symbols.

Kingdoms Rise: Captain’s Treasure also offer a chance to land a progressive jackpot prize. This can trigger at random on any paid spin. There are 3 jackpots with 1 of them paying out every day and the other paying before it hits a certain figure. The best one is the Epic Jackpot which has no limits.

Unlike some of the other slots in this series, Kingdoms Rise: Captain’s Treasure isn’t overloaded with extras. The only feature is the respins round but the trails of wilds means it can be well worth hitting – filling all positions with wilds will result in a 1,000 x bet win.

The design is as glossy and high spec as you’d hope from such a big franchise. Yes, it’s simple. We liked it though. If you like respins, Kingdoms Rise: Reign of Ice has plenty of them with 1,500 x bet payouts on every respin available.