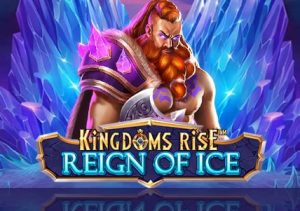 WHERE TO PLAY Kingdoms Rise: Reign of Ice SLOT

Valkyries and Barbarians take centre stage in the Kingdoms Rise: Reign of Ice slot – another game in Playtech’s epic fantasy-themed Kingdoms Rise series. Played using a 5 reel, 25 payline game engine, it comes with respins with sticky wilds where multipliers can boost payouts by up to 5x. Collect tokens and you’ll be able to buy 2 further streak respin rounds from the Kingdoms Rise shop. With stakes ranging from between 10p and £2,000 per spin, there’s something for all players from micro to high roller.

Like the other slots in the Kingdoms Rise series, there’s a classy feel to the design in Kingdoms Rise: Reign of Ice. On the reels you’ll see an assortment of gemstones, weaponry and the Ice Valkyrie and the Ice Barbarian. The latter is the most rewarding, paying 3, 6 or 12 times your bet if you land 3, 4 or 5 on a payline. The standard wild can hit on reels 3, 4 and 5. That’s joined by the hammer wild which can strike on reel 2.

The main extra in Reign of Ice is the Hammer Respins feature. It’s triggered by landing the Hammer Wild on reel 2 plus the Ice Barbarian or the Ice Valkyrie elsewhere on the reels on the same spin. Each Barbarian or Valkyrie on the triggering spin adds to the meter in the top right-hand corner and brings a multiplier into play. This can boost payouts by 1x, 2x, 3x or 5x.

Any standard wilds that land during the respins lock in position. If a hammer wild lands on reel 2, it takes out 1 of the multiplier wilds from the meter. The respins continue until the meter is empty.

Each time a gold token appears, it is collected. Once you have amassed 500 tokens or more, you’ll be able to spend them in the Kingdoms Rise shop. You can unlock 1 hammer for 400 coins or 4 hammer wilds for 1,500 coins (in the Hammer Respins feature). Alternatively, you can buy one of the following bonus features:

Buy the Barbarian Respins feature and you’ll receive 3 respins. Each barbarian that lands is held and the respins reset to 3. Each Barbarian adds to the multiplier bar. Once you’re out of respins, the total stake is multiplied by the amount in the multiplier bar. This round will cost you 800 tokens.

At 1,000 tokens, the Valkyrie Respins feature is slightly more expensive. To start, you’ll receive 3 respins. Each Valkyrie that lands freezes in position and the respins reset to 3. If you fill a whole reel with Valkyries, it brings a 5x multiplier into play. The round ends when you’re out of respins or you’ve filled the whole screen with Valkyrie symbols.

3 jackpots to be won

All about the respins

If you like respin features, then you’ve come to the right place with Kingdoms Rise: Reign of Ice. All the extras include respins and you can expect to see them regularly. We found them to be a bit erratic on the payouts front. The Hammer Respins are very hit and miss. You can win up to 1,500 times your bet on each respin though which is good.

The best chance of landing a decent haul of coins is to trigger the feature with multiple Barbarians or Valkyries which brings the multipliers into play. We’ve no complaints about the design here. The gameplay might be a bit too repetitive for some tastes though – I would suggest you try Kingdoms Rise: Guardians of the Abyss which has 3 free spins features and potential wins of 10,000 times your bet.