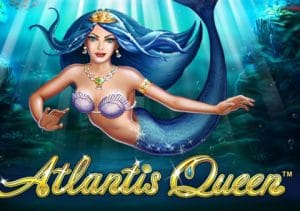 WHERE TO PLAY Atlantis Queen SLOT

Is there treasure lurking in a sunken underwater city? That’s what you’ll be hoping to find in Atlantis Queen, a 5 reel, 25 payline video slot from Playtech. This mysterious aquatic-themed game comes with a pick me feature as well as a bonus feature that offers free spins, multipliers and added scatters. Dive in from between 25p and £1,250 per spin.

Atlantis Queen is a pretty simple affair as far as design goes – set against a watery, turquoise backdrop, the reels include A to 9 playing cards alongside a pair of exotic fish, a hieroglyph style symbol, a treasure chest and Neptune, complete with trident. Land 5 of the god of the sea on 1 of the 25 paylines and you’ll pocket 5,000 coins.

The Atlantis Queen is the game’s wild – as well as replacing all other symbols, she’s also central to triggering 1 of the game’s 2 bonus features. Land the wild on reels 2, 3 and 4 on the same spin and you’ll trigger the Pearl Bonus feature. This is a pick me round where you’ll be presented with 9 pearl shells. Simply pick a shell to reveal a bronze, silver or gold pearl and cash prize to match.

The second feature, the Atlantis Temple Bonus feature, is triggered by landing 3 scatters anywhere on the reels. You’ll then be taken to a new screen and presented with a wall of stones. Starting from the bottom row, pick stones to reveal your rewards which are free spins, multipliers, added scatter and added wild.

After each pick, there are 4 possibilities: Collect all prizes in that column, Pick from the row above, Pick from the same row and Collect and start free spins. The free spins then begin with all the accumulated multipliers, scatters and wilds.

If you can avoid the collect with your first few picks, some impressive combinations are possible here. Once the free games have started, you can add 3 more to your tally if you land 3 scatters anywhere on the same free spin. There’s up to 14 free spins with a 3x multiplier on offer.

Atlantis Queen is a pretty simple video slot as far as sound and visuals go – it has a nice tranquil feel. That’s matched by the variance which is in the low to medium range as the waters here aren’t especially rough. That said, if you get on a roll in the Atlantis Temple Bonus feature and manage to collect the full complement of free spins, multipliers, scatters and wilds, there’s treasure to be found in this underwater realm. If you like the theme, Novomatic’s Lord of the Ocean and NetEnt’s Secrets of Atlantis are recommended.