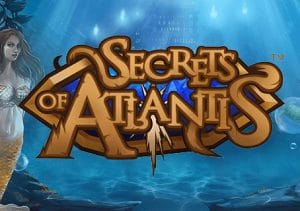 WHERE TO PLAY Secrets of Atlantis SLOT

Based on the famous lost underwater city, Secrets of Atlantis is a 5 reel, 40 payline video slot from Scandi development giants Net Entertainment. Goodies on offer in this nautical adventure include win both ways payouts, nudging wilds and Colossal 3×4 blocked symbols with re-spins. Head beneath the virtual waves from between 40p and £200 per spin.

You very rarely get a bad looking game from NetEnt and Secrets of Atlantis is certainly no ugly duckling – the reels are set against an abandoned underwater city and include a selection of turtle, crab, jelly fish and pearl symbols. Rather than playing cards, the lower value symbols are all gemstones.

The one you want to see is the pearl which awards 400 coins if you land a 5 symbol combination. That may not sound overly generous but remember the game is played using a win both ways game engine.

The mermaid is the wild, replacing all other symbols – if she appears anywhere on a reel, she will nudge up or down until she fills the whole of the reel, turning it wild. This is known as the Nudge Wild feature.

On any spin, 1 or all of reels 2, 3 and 4 can become highlighted – this is known as the Highlight feature. Ideally, you’ll be hoping to find all 3 of the middle 3 reels highlighted as you’ll then trigger a Colossal symbol re-spin. The highlighted reels will turn into a single, colossal 3×4 symbol which appears for the re-spin that follows.

The best possible outcome of course is to hit the mermaid wild as the colossal symbol. If she lands partially on the reels on a re-spin, it will nudge into position until it is fully stacked. Remember you can get 3 fully wild reels if you’re lucky!

There may not be any free spins on offer here but the potential rewards on offer from the Colossal symbols are a more than adequate substitute. Well designed as usual, Secrets of Atlantis is certainly a playable slot.

It may not quite hit the heights of some of the developer’s favourites but the colossal symbols make the Secrets of Atlantis well worth discovering with wins of up to 1,600 times your stake on offer. I also suggest you take a look at Novomatic’s Lord of the Ocean which has a similar theme.